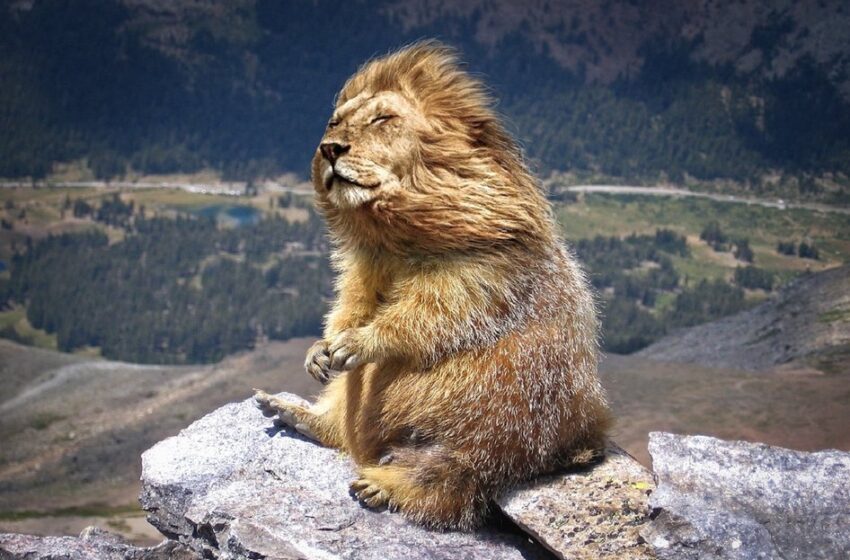 35 new Bonkers animals imagined with the power of Photoshop

(Pocket-lint) – We love seeing magical images created by Photoshop masters, so when we came across a section of Reddit dedicated to creating hybrid animals, we were ecstatic.

These photos imagine a world where anything is possible and create a variety of new races by merging one or more species together. The results are amazing – hilarious, intriguing and empowering.

This cheerful chappy just seems to be enjoying life. Content sitting on a rock, the wind blowing through his glorious mane, the sun shining on his soft fur.

We could all learn a lesson from the Groundhog Lion. A laid back person who lives the best carefree life in the world.

We’ve seen some pretty terrifying hybrid animals on this list, but this one really takes the cookie.

All the power and ferocity of a bear and a crocodile combined into one surprisingly happy guy. Not something we would ever want to encounter in the real world, that’s for sure.

Another little critter with way too many teeth for our liking.

Alfred Hitchcock’s “The Birds” would probably have been even more terrifying if the birds had been part killer whales.

Someone took the ManBearPig character from South Park and made it a gruesome reality using the power of Photoshop.

Looks like he’s got roid rage and he’s really not happy about something.

Both spiny and slimy, this little hedgehog toad would likely have a better chance of surviving in the wild, and with a long tongue, it might even have more success staying clean.

Some of these hybrid creatures might have better lives than the real thing.

Owl hybrids work very well. They are either terrifying or wonderfully majestic.

Wise Tigers would also be an interesting creature to see in action, as long as it’s from a safe distance with David Attenborough’s narration.

What if Donkey from Shrek wasn’t just an actual donkey, but also a hybrid?

Imagine this world and the interesting conversations you could have with it.

Just when you didn’t think chameleons could get more colorful, someone mixed one up with a toucan.

This one seems to be a bit front heavy, but certainly interesting.

Take a brief moment, if you will, to imagine the hairballs this thing would spit up.

Of course it’s an Elephant Cat or Cat Elephant or Kittyphant – so no hair, no problem. We wonder if he would still like to rub his belly?

We are not usually afraid of spiders, but this one is really terrifying.

Hairy, quick-tempered, able to hiss and leap great distances while still landing on his paws. Ouch!

Some of these hybrid animal photos result in some pretty cute and cuddly creatures. This so-called Orangupanda does indeed look like a happy chappy.

Relaxing, gazing into the distance with satisfaction, maybe dreaming of bamboo shoots or bananas. We’re not sure, but we love it.

Another hybrid creature that makes baboons less threatening, but might make birds a bit more intimidating.

This little guy looks like he needs a nap.

We like to imagine not only what some of these creatures would look like if they were real, but also how they would move and live in our world.

Imagine this new animal rushing to the side for a happy chuckle.

We’re not sure cat fur and snow would be a comfortable mix for this little guy, but somehow the two creatures work well together.

Penguins have never looked so cuddly or worried.

Imagine a world where your cat could blend in with its surroundings, but also have quirky eyes that can turn and twist in any direction.

We don’t know if that would be terrifying or hilarious. We’re sure this pussy would do all sorts of shenanigans.

This one combines food and water ducks. A curious imagination.

We certainly don’t know what would happen if these ducks started to over-ripe, might get messy.

Look at this puppy. We bet he’s a good boy on land or in the water.

Probably the best swimmer you’ve ever seen and much better at retrieving balls in the water.

A cross between a bear and a giraffe. We think it was originally a polar bear and we’re not sure this new color scheme would make great camouflage, but we know it looks awesome.

This one combines food and water ducks. A curious imagination.

We certainly don’t know what would happen if these ducks started to over-ripe, might get messy.

Another hybrid imagining combining owls with other animals.

This short, stocky hybrid is eerily wonderful and just as majestic as the original creatures used as inspiration.

This one is quite possibly one of the most extreme hybrids on our list.

Seahorses aren’t usually very dangerous, but this one has a real bee in its bonnet and the teeth to back it up. We wonder if an underwater dinosaur could have looked something like this.

Boring old elephants. All dull and gray and disappointing.

Imagine if they had colorful butterfly-shaped ears instead. What a wonderful world that would be.

Fluffy, tiny, fond of sticks, this little hybrid has it all.

A gorgeous little dog and rabbit hybrid that we imagine is great to have, but difficult to control on walks.

Less King Kong and more King Donkey? This hybrid is not only majestic but also beautiful. Somehow more peaceful and thoughtful than the two animals in the real world.

We also appreciate the gold hoop earring, a nice unexpected touch to an already brilliant photo.

A cat mixed with a penguin could have given a cute and cuddly hybrid, crossed with a dog, the results are tickling.

It’s a face only a parent can love. The slime levels would also be ridiculous.

Do you feed this thing fish, sugar cubes or carrots? We cannot tell.

We also wonder how many people would be willing to take him for a ride. Definitely an interesting beast though.

The aptly named Snaken is as majestic as it is terrifying.

Other potential names for this fun creation included Crockatrice, Snooster and Slitherhen. Whatever you want to call it, the detail Photoshopping is fantastic.

Imagine a world where birds were also fluffy instead of having feathers. A Redditor asked if the bunny bird, aka the Burb, flies with its ears.

We would definitely like to see it in flight, that’s for sure.

We have a feeling that the whale rhinoceros or Whino could be the king of the sea.

This massive horn would surely be useful for seeing other sea creatures when looking for a snack. Majestic, beautiful, but probably not very graceful.

This edition was submitted to Reddit with the title “The Graceful and Majestic Horsoppotamus” – a Redditor thanked the uploader for the nightmarish material.

Certainly a strange creature. We’re not sure we’d like to be the one trying to break it.

This thing looks oddly cheerful and ready to have a good time, but in full size we wouldn’t want to get involved.

Imagine the fight a Croctopus could endure with all those teeth and a multitude of legs at its disposal.

Have you ever looked at a Zeebra and thought “well, that looks delicious”? No? Well, you might have it now, especially if you’re a fan of Oreo cookies.

Maybe all the white stripes are just cream.

What a creature this one is. Imagine mixing a frog and a duck into one animal.

Able to jump great heights, fly with ease, or simply float on the surface of the water croaking wildly.

What if wild foxes were also delicious food? Loaves of bread on legs?

They probably wouldn’t survive in the wild, but they sure would make you look twice.

Wienerpede or Sausagepillar, a small dog with an unconscionable amount of tiny paws. Cute or terrifying?

We are not sure. Yes, that may sound adorable, but expect him to rush into your room first thing in the morning.

We enjoy this one, not only for the high-quality Photoshopping, but also for the pun.

Morse and wool combined in a Woolrus. Do not attempt to use it for knitting.

We bet Dumbo would have loved gorgeous ears like this.

With giant eagle wings for ears, Disney’s elephant could have flown with more grace and enthusiasm.

This little creature certainly looks cute and fluffy, but knowing how much trouble cats are, we can’t imagine it would be much fun to have. Imagine those horns constantly hitting you while you are preparing food or just trying to live your existence.

Great Gonzo, the most eccentric of all muppets, has now been given new life as a fish.

He doesn’t look too impressed, but we are. Hats off to the creator Supdog69 for this superb illustration.

Here we see the less spotted Girtle. A mixed breed of tortoise and giraffe. A creature that still needs a long neck to reach its prey buried in sand or among coral.

Bears seem to be high on Reddit with people determined to create weird and wonderful creatures by combining them with other animals. Here, a black bear has been mixed with a black bird. Connection.

As if Rottweilers weren’t intimidating enough, this Redditor made one even more dangerous by mixing it up with a bear. Yeah. Who is a good dog?