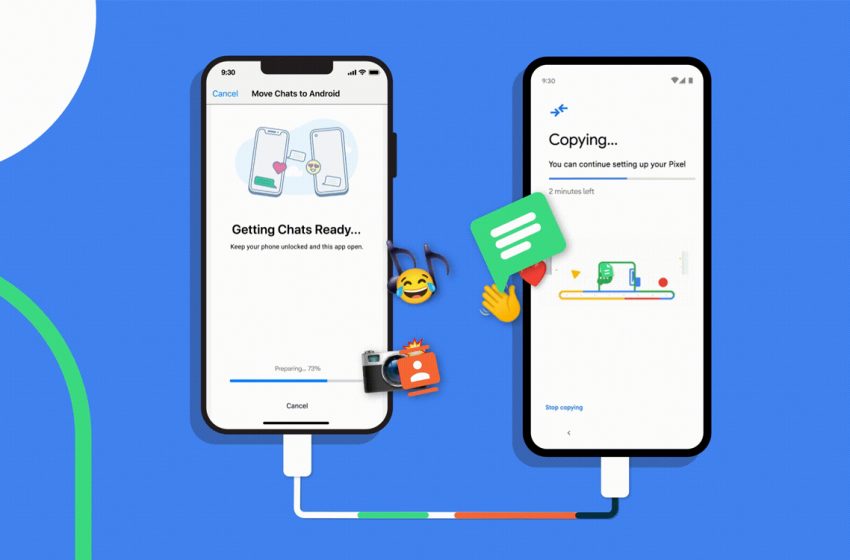 Android 12: you can now transfer your WhatsApp history from your iPhone to your Pixel

With Android 12, it will finally be easier to recover your WhatsApp conversations from an iPhone. To do this, just connect the two smartphones with a Lightning / USB-C cable and let the operating system do the rest. Only the Pixels and Samsung Galaxy have the right to this feature at the moment, but the other models should soon offer it too.

In recent years, it has become increasingly easy to switch from iOS to Android. Most manufacturers now offer a data migration system that allows the user to simply press a button and wait for the operation to take place. However, not all applications are entitled to this preferential treatment yet. This is particularly the case with WhatsApp, which does not offer the possibility of retrieving conversations on an Android smartphone from an iPhone.

But that will change with Android 12. Google has announced that transferring app data from an iOS will now be much easier. For that, it will just take get a USB-C to Lightning cable. “Those fond memories, those photos, those voicemail messages and those conversations with friends and family can be very hard to leave behind, and that’s a problem we wanted to solve.”, the firm said.

On the same topic: WhatsApp – how to transfer conversations to another smartphone

It has been a few months since Google has been preparing this feature that users have been impatiently waiting for. With Android 12, it will therefore suffice to connect the two smartphones and scan the QR Code displayed on the iPhone to start the migration. This feature is already available on the Samsung Galaxy, as announced by the Korean manufacturer, as well as on the Pixels which have already received the latest version of Android. The next smartphones with Android 12 will also be able to perform the manipulation.

“Our team has worked hand in hand with WhatsApp to ensure that your data remains protected throughout the transfer process, so that no one else can ever access your information and files.”, assures Google. “Your WhatsApp conversation history will just be copied from your iPhone to your new Android phone, and we’ll automatically make sure that you don’t receive new messages on the old device while the transfer is in progress. “