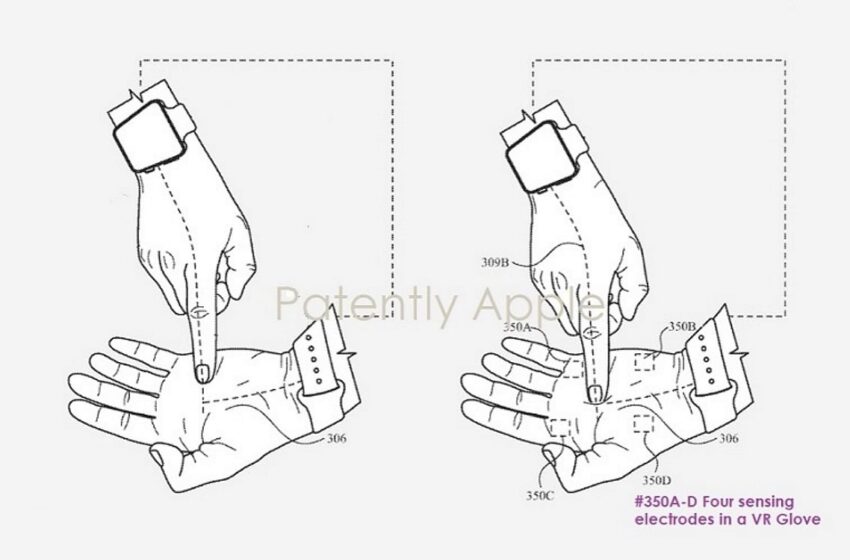 Apple Glass: the VR headset would arrive with gloves to detect finger movements

Apple continues to file and receive patents for its new mixed reality headset, dubbed the Apple Glasses. Patently Apple has also discovered a patent concerning the use of gloves to detect skin-to-skin contact in augmented/virtual reality.

According to Patently Apple, VR gloves could allow users to perform certain actions like moving a cursor, scrolling, opening a document, making a selection, etc. In addition, the helmet’s camera or radio frequency systems could be used to track the movement of the user’s fingerswhich would allow it to interact with objects or other users.

How do Apple’s patented gloves work?

The diagrams accompanying the patent filing show a user using their palm as a trackpad while using a finger on the other hand to perform familiar gestures such as squeezing, swiping, and pinching. For the moment, it is not known if it will be an essential accessory to use the helmet, or even if Apple actually plans to market such a product.

The patent also imagines that Apple could use two accessories such as Apple Watch to detect skin-to-skin contact. The patent examples indicate that one watch could be used for sensing, while the other could implement gesture. The patent also suggests thatApple could use a ring as a second wearable device. This is not the first time that we have heard of such an object, since already at the beginning of the year, another Apple patent presented a ring capable of controlling devices remotely like a remote control.

We should soon know more about Apple’s mixed reality headset, since its launch is scheduled for early 2023. Fortunately, we already know that the headset will be 100% autonomous, and several reports have assured that it will be much lighter and more comfortable than the competition.