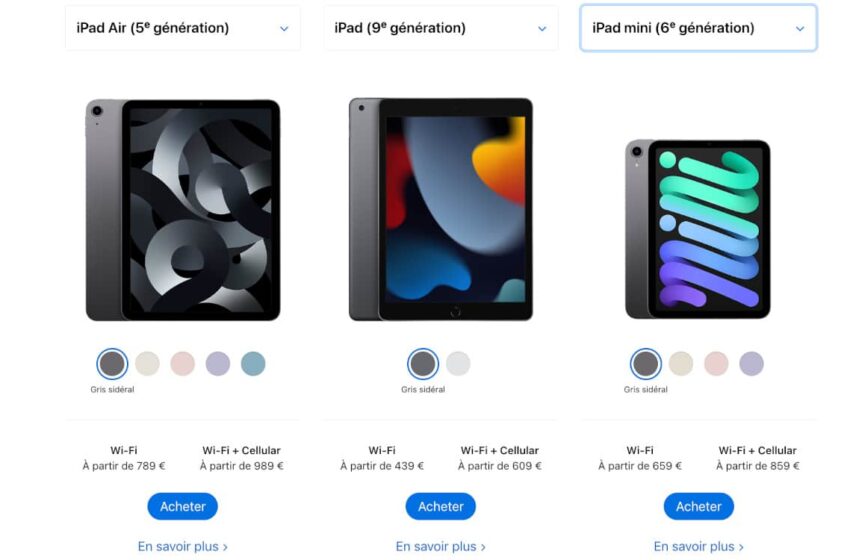 Apple increases the price of the old classic iPad, Air and Mini, a first

Yesterday we published a full article on the new iPad Pro and classic that Apple has made official. First there is theiPad Pro 6th Generation 12.9-inch and the 11-inch iPad Pro 6th generation. Both are powered by the Apple M2 SoC that you also find in the MacBook Air M2 that we tested during the summer season. Their prices start at 1469 euros and 1069 euros respectively. And then there’s theiPad classic 10th generation. Closer to an iPad Air than its predecessor, it benefits from several internal and external improvements. Its price starts at 589 euros.

The starting price of these iPads is up from those of their predecessors, the 2021 iPad Pro 5th generation (launched at 899 euros and 1219 euros) and the classic iPad 9th generation (launched at 389 euros). Given the prices applied to the iPhone 14, this is hardly surprising knowing Apple, even if the changes made to the iPad Pro do not justify the high price inflation: 170 euros for the 11-inch version and 250 euros for the 12-inch version, 9 inches. What surprised us is the price increase of tablets that remain in the catalog.

Indeed, to accompany the two models (or three if you count the two sizes of the iPad Pro), Apple continues to offer theiPad Mini 6th Generationreleased in September 2021, theiPad Air 5th generationlaunched in March 2022, as well as theiPad classic 9th generation, released in September 2021. These three products, which have not undergone any technical changes since the start of their marketing, are sold at a higher price. And this as soon as the new tablets are made official. Find below the evolution of their starting prices:

You will notice that the progression of the price is not equal. fifty euros in the best case. 130 euros in the worst case. Remember that these increases do not include any benefit for the consumer: you do not benefit from an additional storage level. Apple does not communicate on the reasons for these increases. But this is certainly a consequence of exchange ratefrom energy price or even manufacturing costs. However, whatever the reason, it seems quite unfair. Especially since the components have discounted since the release of the tablets concerned.