Apple has just presented the Apple M2, a new processor born from its divorce with Intel. More energy efficient, the chip promises increased performance compared to the previous generation. It powers the brand’s new MacBook Air.

Apple kicked off WWDC 2022 by showcasing the big news of the iOS 16 and WatchOS 9 update. As rumors had it, Apple also used the WWDC 2022 keynote to unveil a series of new hardware. The American group has thus unveiled the Apple M2, a new chip developed by its Apple Silicon division. The processor is based on the ARM architecture.

To present the chip, Apple again relied on Johny Srouji, Vice President of Apple Hardware Technologies. According to the manager, the processor counts 20 billion transistors. Engraved in 5 nm by TSMC, the M2 has a unified memory 50% faster than the M1 chip, i.e. 100 GB/s. The chip switches to LPDDR5 memory, compared to LPDDR4 for the previous generation.

Related: Apple Maps Gets a Makeover with 3D Cities 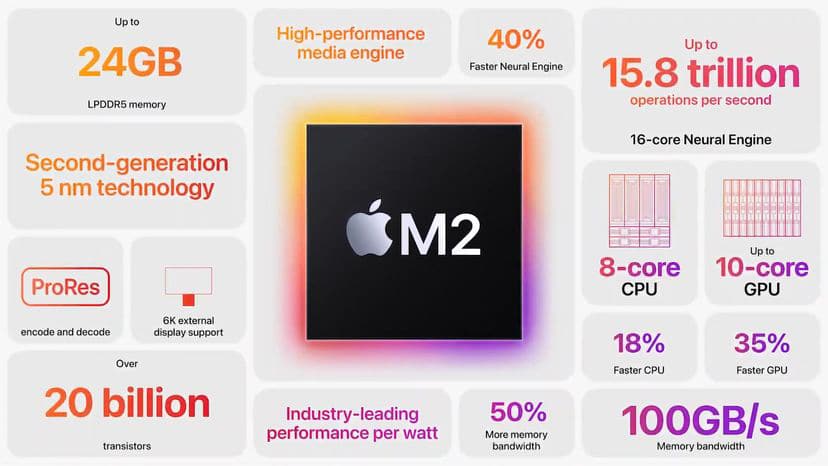 The Apple M2 features 4 cores dedicated to performance with 16 MB of shared cache, 4 cores dedicated to power consumption with 4 MB of shared cache and up to 25 GB of RAM. apple brings significant improvements over the previous chip, such as an 18% faster CPU and a 25% more powerful GPU. Apple mentions a maximum output of 3.6 teraflops per second.

Apple specifies that the GPU has 10 cores and that the neural engine manages 40% more operations than on the M1. These improved performances will facilitate the export of videos or any of the tasks performed by the workers. The icing on the cake, the brand has also reduces chip power consumption, which should improve battery life. The chip still promises to be less energy-intensive than Intel solutions.

The company didn’t hesitate to compare M2 to Intel’s chips, including the Core i7-1260P and 1255U. Apple advertises much higher energy efficiency and better raw and graphics performance. Finally, Apple specifies that the chip will support 8K streams and 6K displays.

Apple is integrating the M2 chip into its new MacBook Air and its 13-inch MacBook Pro. The processor is intended for computers intended for the general public. The most demanding professionals can always turn to the M1 Pro and M1 Max chips announced last year.