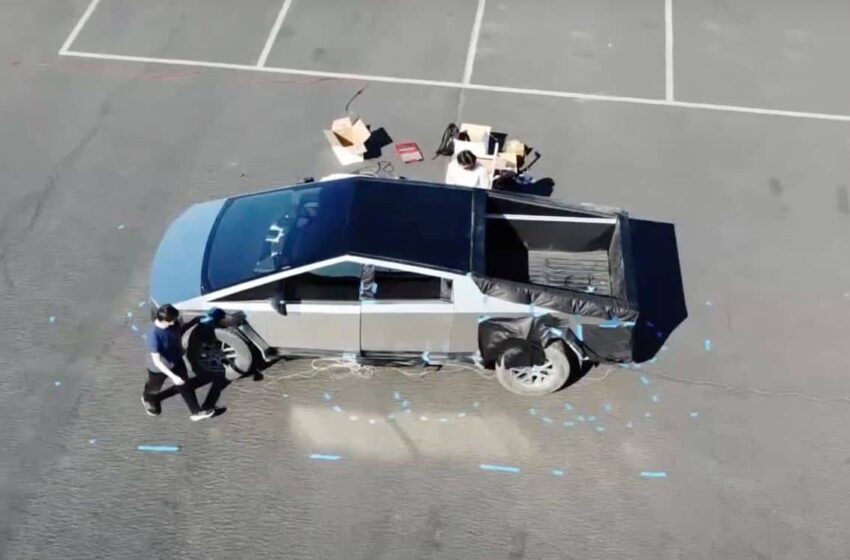 Cybertruck: Tesla’s pickup is still shown in a stolen video

Tesla’s Cybertruck was spotted again in a stolen video. This is a prototype spotted at the Fremont, California proving ground. We notice that the windscreen wiper that had caused so much talk has simply disappeared.

Tesla’s Cybertruck was announced in 2019 and still hasn’t been released. Expected for 2023 at the earliest, it continues to be tweaked by the engineers of the brand as shown in this video.

Shared by Electrek, she was performed by drone at the Fremont plant proving ground (California). If we can ask ourselves questions about the safety of employees around the vehicle (the drone approaches it very easily), we can also see this new prototype.

The prototype in question doesn’t look much different from what we’ve seen so far. Note, however, that the huge windshield wiper that had caused so much talk a few weeks ago has simply disappeared. A good thing, given that it came to break the aesthetics so particular of the car, let’s face it. The side mirrors are good for them, however. Employees working on the vehicle seem to place sensors for the famous AutoPilot. For the rest, this is the Cybertruck that we know, the one that has been waiting for more than two years now.

Tesla Cybertruck: the date of entry into production deleted, no release in 2022?

Presented at the end of 2019 by Elon Musk during a memorable show, the Cybertruck has continued to see its release postponed, and this despite its success during pre-orders. Currently, Tesla has simply removed the vehicle’s release date from its website. We could therefore fear a delay in the start of production at the end of 2022, or even 2023.

Not long ago, Elon Musk confirmed that the priority was to fulfill orders for existing vehicles. The shortage of semiconductors has hurt the manufacturer very badly and for the moment, it is the Cybertruck that is suffering from it. At the same time, Tesla deprives itself of developing new vehicles, perhaps less expensive.