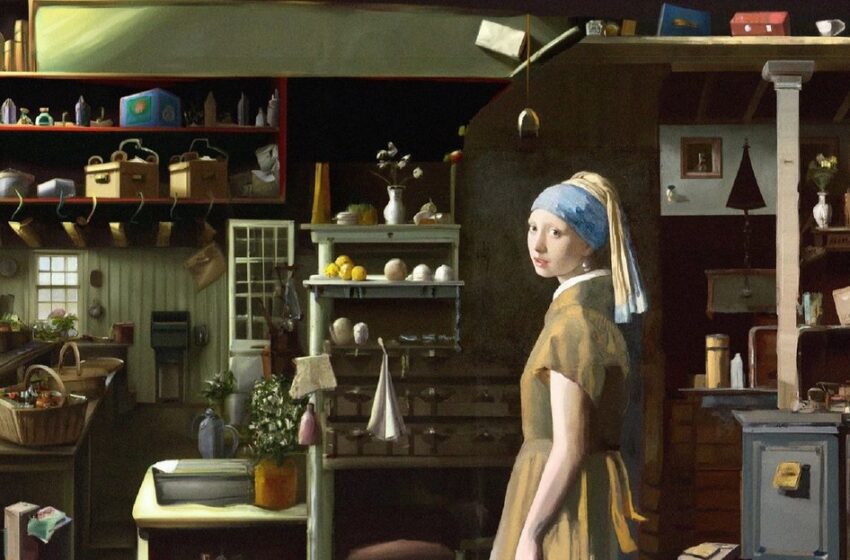 This new feature of DALLE-E is known as “outpainting” and allows users to take an original image and then ask artificial intelligence to expand the boundaries of the artwork. Here, DALL-E adds additional visual elements to the painting, taking the original style and expanding the boundaries.

Interesting examples of outpainting in action appear to show believable environments to well-known portrait paintings and more. We have collected a few for your viewing pleasure.

The girl with a pearl earring

Here the outpainting function has been used to transform Johannes Vermeer’s Girl with a Pearl Earring into a much larger canvas image. The expanded view shows much more of its surroundings.

At first glance, this is all perfectly believable and suits the original style of the painting perfectly.

If you haven’t had access to DALL-E yet, you can still see outpainting mode in action and get a taste of how it works. The tool gives the possibility to change elements of the painting as the canvas is extended, so that different works can be created with the same image.

A friend in need

I used the new “outpainting” function of DALL-E 2 to enlarge the largest work of art in the world… pic.twitter.com/0HXQzngt9P

Dogs Playing Poker is a wonderful series of paintings showing man’s best friend engaging in classic human activities. But if you’ve ever wondered what lies beyond the frame of the original canvas, then DALL-E might have the answer.

Here, MG Siegler, General Partner of Google Ventures, used DALL-E to repaint the classic 1903 painting “A Friend in Need” by Cassius Marcellus Coolidge. The overview of the room shows other puppies having fun. We imagine it in the back room of an old-fashioned speakeasy.

The outpainting feature can be used on all sorts of things it seems and not only serves to extend the sides of a landscape image but can also show more of what is above and below below.

Here we see more of the Paramount Pictures logo environment. Is this what it would really look like? Looks like a dreamy vision with soft clouds and a beautiful sunset.

Vincent Van Gogh’s Starry Night takes on a whole new aesthetic when played in DALL-E. Already quite eccentric, it now features a dinosaur, a spaceship and what looks like a building floating in the sky.

In addition to pushing the boundaries of arrays, this feature of DALL-E can also be used to combine images.

The artificial intelligence works magic to put the images together in a convincing way. Here, Batman and Captain American are having a serious talk on a rooftop.

A new version of another company’s logo made using the repaint feature.

This time it looks like Quaker Oats has been given a rebrand, and a telling rebrand.

Ever had one of these movies as a kid and wondered what it would be like if it was even bigger? DALL-E made light work of what already looked like an abstract painting and produced more roads to walk.

The Beatles’ Abbey Road album cover is perhaps one of the most well-known and recognizable album artwork of all time.

If the original image hadn’t focused on the band members, what would we have seen?

Today the portrait, tightly framed, has been enlarged to better show what is happening in the background. One can perfectly think that it is about the original work.

We have seen several interesting versions of Mona Lisa. Notably, we used AI to give her a wider smile and reimagined her as a modern-day influencer. But we never really thought about what Leonardo da Vinci might have painted beyond the confines of the portrait panel.

What an interesting world we could have today if he had seen these images in the early 1500s.

Here is one of the most iconic images of all time, which has been repainted. The original image is usually shown with a crop centered on the unknown protester stopping the column of 59 tanks.

Now you can see a larger and very different view of the original large photos of the area. Yet it is believable and interesting.

The creation of the elephant

Michelangelo’s original painting, which adorns the famous Sistine Chapel ceiling, originally depicted God and Adam. A representation of the creation of man, but God also created elephants. So maybe this paint could be an alternative.

We have already seen that outpainting is not just about paintings. It also works with real photos, logos and more.

Here, one of the most famous memes of the current era has been expanded to show a chaotic street surrounding the distracted boyfriend and the others.

This time it looks like the user has given the AI ​​a bit more creative freedom and it’s certainly not the most compelling image we’ve seen, but it’s hilarious.

The persistence of expanded memory

The Persistence of Memory by Salvador Dalí is one of his most recognizable works. Painting the edges of DALL-E adds even more intrigue with mysterious women and even more clocks.

We’ve seen a few interesting editions and reimaginings of American Gothic over the years, but this one is certainly a surreal take on classic painting.

Another meme getting the paint treatment. Now, we can see more of what happened around here, as “Disaster Girl” is pictured smirking in front of the burning house.