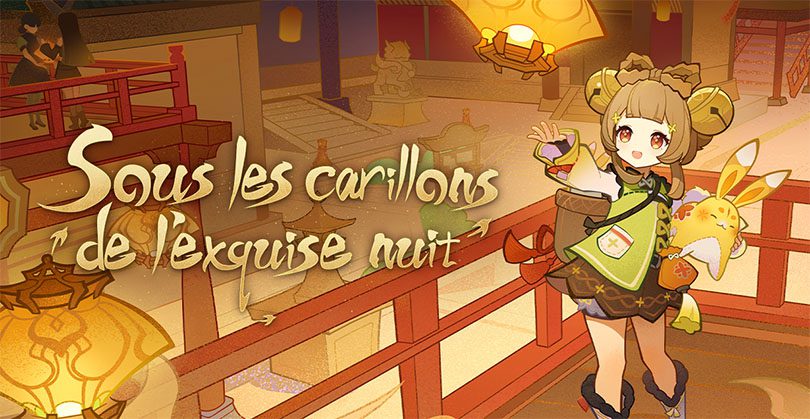 Genshin Impact Update 3.4: Beneath the Chimes of Exquisite Night

Scheduled for January 18, 2023, the Genshin Impact Update 3.4: Chimes of Exquisite Night will open the doors of a new area located in the Sumeru desert. This will be an opportunity to explore, complete new quests and earn Primitive Gems. Which is rather welcome since 2 new characters appear this month: Alaitham and YaoYao, both Dendro heroes. While waiting for the arrival of this patch, we detail what awaits you in version 3.4 of Genshin Impact: banners, events and TCG update.

As has been the case for a few updates already, the Genshin Impact version 3.4 will offer 4 banners with 2 new characters.

The first part of patch 3.4 will offer you to summon Xiao (5 stars Anemo) or Alaitham (5 stars Dendro). It’s about a one handed swordsman whose gameplay is reminiscent of that of Keqing, but in Dendro version. This promising DPS should work well with Nahida and the Electro and Hydro characters.

You can also try to summon his signature weapon in the weapon banner: Leaf incision light. This one-handed sword greatly boosts critical damage, but also the critical rate and damage of normal attacks and elemental skills.

Both Alaitham and Xiao will be accompanied by yaoyaoa 4 star character Dendro fighting with a polearm and summoning stuffed animals. In addition to being adorable, they provide care. It will therefore be the first Dendro healer RPG! It will allow you to compose new teams.

During the second part, you will benefit from the reruns of Hu Tao, one of the best DPS of the game and Yelan, a formidable Hydro support, playable in many teams. These are top tier characters.

The Genshin Impact update 3.4 : The Chimes of the Exquisite Night expand your playground with the appearance of a new area in the desert part of Sumeru: the Hadramaveth region.

This will be an opportunity to explore, find chests, new Dendroculus, but also to carry out new world quests. New enemies as well as the boss Setekh Wenut will also appear.

The Genshin Impact update 3.4 obviously offers its share of events, including a new edition of the Liyue Lantern Festival.

the Liyue Lantern Festival will be the main event of Genshin Impact version 3.4. It will offer you several mini-games related to the Liyue festivities. You will also be entitled to 13 summons offered. You will get 10 via login bonuses and 3 more in your mailbox.

In addition to that, by participating in the lantern festival, you will be able to unlock a 4-star Liyue character of your choice. You can even get a Yaoyao through this.

Arataki Itto proposes to you to finally carry out scarabuto fights. You will be able to make the beetles confront each other.

The event Second flowering will offer you, for its part, to compose teams of characters to fight enemies. In addition to various rewards, including Primo-gems, it will allow you to unlock a new free outfit for Lisa.

The way of the warrior

The way of the warrior consists of a martial arts competition organized by the cultural commission in Inazuma, where you will have to face opponents only by using sword techniques, parrying or dodging their attacks.

During this event of Genshin Impact update 3.4, you will discover the new outfit of Kamisato Ayaka. You can then buy it at a reduced price, it will then be on sale in the in-game store.

This time, the card game benefits from a new game mode where you will play directly with 8 Omni dice. In this way, you can more easily perform the attacks of your choice. You will also have two new cards: Beidou and Klee.

In the meantime, we invite you to discover our guides to the best decks and the best TCG cards to refine your strategies.

You now know everything about the Genshin Impact update 3.4. This will come out on January 18, 2023 and will therefore offer a varied content, but also a large number of Primo-gems.

Unfortunately, this will not be enough to summon all the available 5-star characters. Choices will therefore have to be made. To help you, do not hesitate to consult our guides devoted to Xiao, Yelan and Hu Tao. We will not fail to write one on Alhaitam and Yaoyao as soon as they are released.