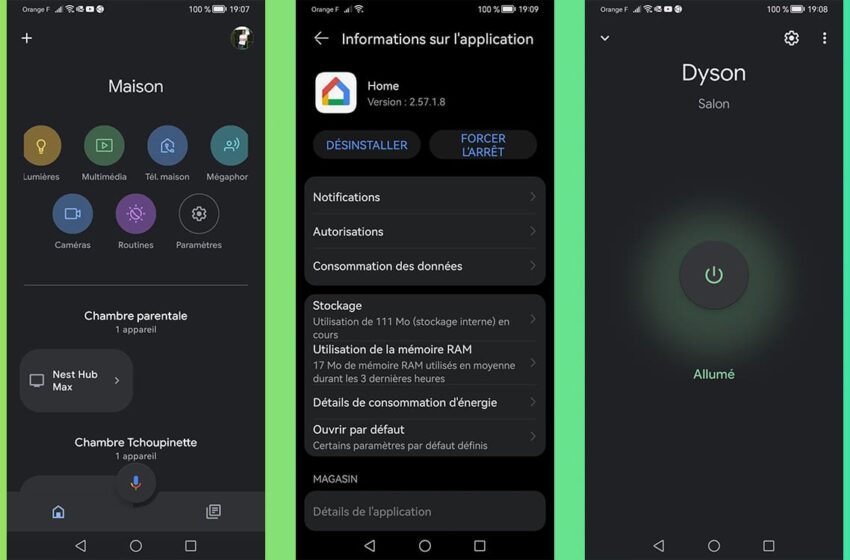 The new version of Google Home is rolling out. On the menu of new features: better controls for televisions, fans, vacuum cleaners and other connected devices in the home.

Google Home version 2.57 disembarks. The Mountain View giant has just posted a message on its “Made by Google” Twitter account, indicating that the new version of its application was being deployed.

“We’ve started rolling out redesigned controls for popular connected home devices in the Google Home app, to make it easier for you to control your home,” says Google. “Check out available updates for fans, air purifiers, vacuums, TVs, and more.”

Read also: the Google Home app gets a makeover to facilitate quick control

Google is hardly explicit about the new features brought to its application. Remember that one of the most recent updates to the application already offers a better interface, and also made it possible to interact more quickly and more efficiently on certain connected devices in the home. Today, with a simple touch on the screen of your smartphone, you can perform certain actions such as turning on a device, controlling the brightness, adjusting the volume, etc.

But the devices concerned were for the moment very limited. The latest app update expands the type of connected devices to more. As a result, fans, vacuum cleaners and TVs now benefit from extended control possibilities. It is not known, however, if the televisions concerned are those which are compatible with Google Home, or if a device equipped with a Chromecast device will also be able to benefit from it.

Google Home 2.57 is rolling out to Android. Understand that this edition is not yet available in all countries or on all devices. However, this same version is already available on a larger scale on iOS. For our part, on our test Android smartphone, we had to go through the installation of an APK file (via the APKPure site) to take advantage of the new version of the application.

We’ve started rolling out redesigned controls for popular smart home devices in the Google Home app to give you easier control of your 🏠!

Check out the updates for fans, air purifiers, vacuum cleaners, TVs, and more.