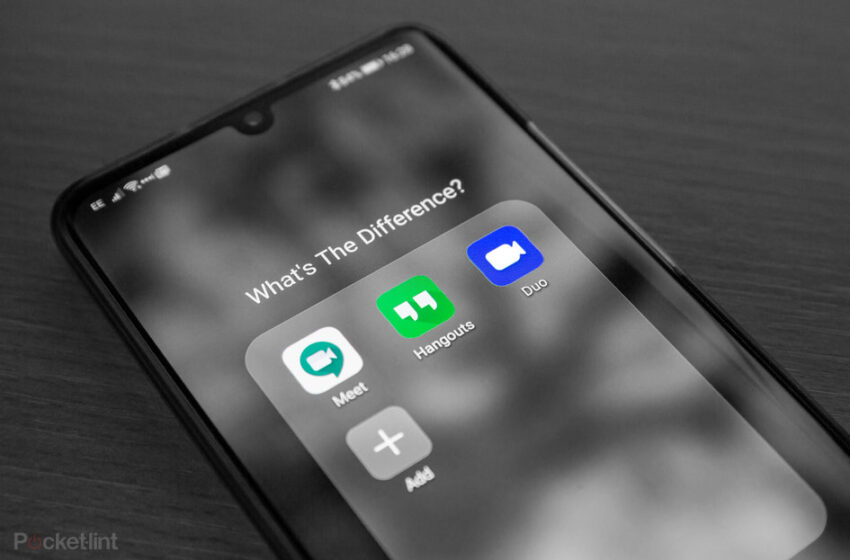 (Pocket-lint) – Over the years, Google has offered a wide range of video and chat solutions, many of which have been discontinued and others overlap in their offering.

The current selection consists of Google Meet, Google Hangouts and Google Duo. But which app should you use and what do they all offer? We present the differences to help you decide.

Google Meet has changed its name over the past two years. It was previously known as Google Hangouts Meet. Initially, it was the enterprise video conferencing solution offered by Google. It is available to all Google Workspace (formerly G Suite) users, i.e. businesses or schools that pay for Google services for their users. It’s basically Google’s version of Zoom, which comes in three tiers: Google Meet, Google Workspace Essentials, and Google Workspace Enterprise.

However, Google has made Google Meet available to anyone with a Google Account. It is therefore free for the public and allows you to call up to 100 people with no time limit. You can access it at meet.google.com.

Recently, Google Meet was integrated with Gmail, so you can access the service directly through the mail app.

Google has added features to Google Meet to make it more user-friendly, adding controls, a gallery view, more advanced screen sharing options, including individual Chrome tabs – although some of these controls aren’t as granular as Zoom when it comes to participant control and screen sharing.

Google emphasizes security, however, saying the videos are encrypted during transmission and when saved to Google Drive. It supports videos up to 720p and anyone with a Google account can join a Google Meet.

Google Meet works in a browser, with no plugins or desktop apps. There are apps for Android and iOS devices. According to Google, working in popular browsers makes the app more secure.

Google Meet is free for everyone with a Google Account at entry level.

Google Hangouts was announced in 2013 as a spin-off from Google+. It’s been integrated with Gmail and other Google apps as a communication tool, joined by Google Hangouts Meet and Hangouts Chat, for Workspace clients, which now work without Hangouts in the name, although users of personal Google accounts will still see Hangouts in Gmail. The service can be accessed at hangouts.google.com.

Hangouts is expected to close soon. Many Workspace users have abandoned the service (in favor of Chat) and private users have received a notification informing them that the service will soon be replaced by Google Chat. Still, it’s a free video and chat tool for Google account holders, integrated with Gmail and allowing desktop calls with or without video.

While Hangouts was once positioned as a texting chat tool, the rise of Messenger – with support for RCS – has seen it emerge as Google’s natural place to “chat”, but Hangouts works still as a group chat solution for some people.

The appeal of Hangouts mainly comes from its easy integration into other Google products and its persistent visibility in Gmail, as well as access to history synchronized between devices, which means that Hangouts can give you conversations synced across a number of devices or platforms.

It supports video calls for up to 10 people for personal users, phone calls via Hangouts dialer app, and messaging for up to 150 users, all accessible via browser or apps on devices mobiles. Like Apple’s FaceTime, users can be contacted by Hangouts via an email address.

Hangouts is available through a browser and there are apps for Android and iOS.

Google Duo was announced in 2016 as an equivalent to Apple’s FaceTime, pushed as a person-to-person video calling app. It’s much more personal than Hangouts or Meet. You can access Duo at duo.google.com.

Google Duo has grown in popularity as a universal video calling app – supported on Android and iOS devices (as well as browsers) – making it an ideal solution for video calling from Android to iPhone instead of FaceTime, although WhatsApp video calls are becoming increasingly popular.

Google Duo lets you make voice or video calls to contacts through phone numbers or email addresses. You can leave video messages for those who can’t answer those calls, which makes it very different from Hangouts and Meets. There is no support for text messaging or screen sharing like in Meet.

Duo also has a feature called Knock Knock, which is to show your video to the person you’re calling when the phone rings. It’s like having someone at your door.

Google Duo is available in a browser and in Android and iOS apps.

Google Duo is free, you just need a Google account.

What is the best solution for you?

Although Google seems to have a lot of overlapping products, it’s actually quite simple when you take a step back. If you want to video call your friends from your phone, Google Duo is the best way to do it. It’s great for personal communication and fun to use, with support for small groups. Duo goes hand in hand with Messenger, the consumer chat solution supporting SMS and RCS.

For larger groups, Google Meet is more sophisticated than Hangouts, and Google Workspace users will find that Meet has replaced Hangouts in things like Gmail. Although Meet isn’t as good as Zoom, it’s moving fast. Google Chat is available to Workspace users for team messaging, but is not intended for consumer use. With Google making Meet available to everyone from May 2020, it’s a much better option than using Hangouts.

Hangouts survives, but barely. The name of Meet and Chat having been abandoned, Hangouts is now reserved for users who do not have a workspace, i.e. those who have a Google account. It’s still possible to make video calls and group chats from a single app, but the experience isn’t as polished as the other solutions. Although there is no confirmed date for the shutdown of Hangouts, we believe it will be sometime in 2022.