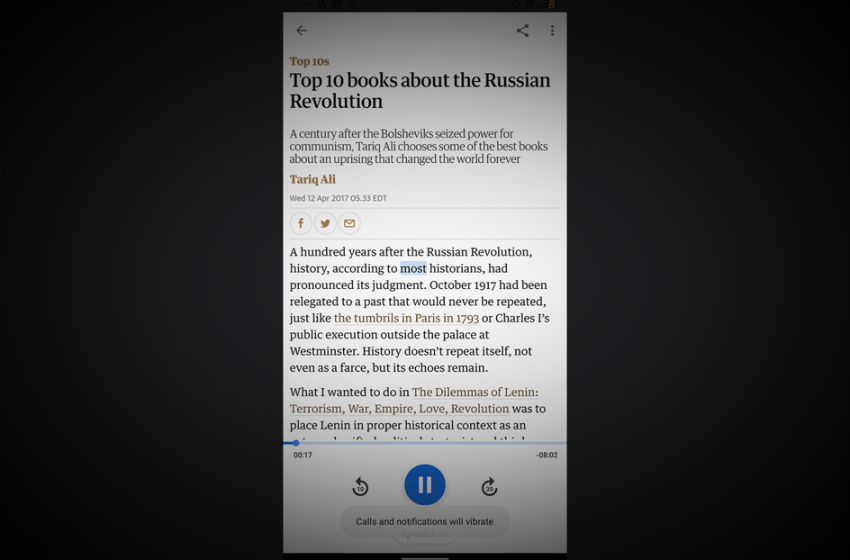 How to Get Google Assistant to Turn Web Pages into Audiobooks

(Pocket-lint) – Think about what you read on your phone every day, whether it’s news, a blog post or an article. But those of you who move around a lot, or perhaps have visual or reading difficulties, may need a little help going through all this material every day.

Fortunately, Google has a Google Assistant feature just for you. It’s called Read It. But it’s exclusive to Android users at the moment.

Alright, we know what you’re thinking: why would you want Google Assistant to read aloud an entire webpage in a robotic voice? That’s not what we’re talking about here. Instead, Google Assistant can turn almost any text on the internet into an incredibly natural audiobook in up to 54 languages.

With Google Assistant, your browser can now read virtually any article aloud. To get started, you just need an up-to-date Android phone running the Chrome browser. Then, in Chrome, navigate to a webpage you want to read, such as pocket-lint.com or theguardian.com.

When a web page is displayed in your Chrome browser on your Android phone, you can say “Hey Google, read it” or “Hey Google, read this page”, then Google Assistant will immediately read aloud the contents of the Web page. To help you follow along, the feature will automatically scroll the page and highlight words as they are read aloud. You can also change the playback speed and choose from multiple voices and languages.

When you say the “Read it” command, you enter a custom view for the Read It function. You’ll see the article in the top two thirds and the reading controls at the bottom. You can skip back and forth with the rewind/forward buttons, or pause or play. But we think Read It is particularly useful once you turn off your screen or open another app; it will continue to play like any audio player. In other words, you can listen on the go.

The key thing to note is that web pages are read aloud in what Google describes as “expressive, natural voices, aiming to use the same intonation and rhythm you would use if you were reading them aloud yourself. voice”. Websites don’t have to do anything special to enable Read It, but app developers have to add this feature, which means not all your favorite apps will support Read It. You will have to test it to find out which ones work.

How to rewind or forward or skip

When you use Read It on a web page, you will notice reading controls at the bottom. You can use the rewind 10 seconds and forward 30 seconds buttons next to the play button. You will also notice that text read aloud will be highlighted as it is read. To change what you hear, tap another paragraph. It’s so easy.

How to change the speed

When you use Read It on a web page, you will notice reading controls at the bottom. Below the play button, there is a speed option. Here you can also adjust the playback speed up to 0.5x tempo or up to 3.0x. We think the default speed of 1.0x is ideal, but it’s all up to you and your preferences of course.

How to change the voice

When using Read It on a web page, you will notice a three-dot overflow menu in the upper right corner. Tap it to access a few more options, such as read-aloud, which lets you change the voices of the feature. There are ten voices to choose from for playback – these include female and male American accents as well as British, Indian and Australian accents.

How to change the language

When using Read It on a web page, you will notice a three-dot overflow menu in the upper right corner. Tap it to access a few more options, such as Translation, which lets you translate the text into another language. As of January 2022, you have the choice between 52 different languages, including German, Spanish and French.

It’s also possible to disable text synchronization if you don’t want the article to scroll as you read it. This is another option in the three-dot overflow menu.

As we noted earlier, Read it works on all web pages but not in all apps because developers need to support the feature. We tried it in The New York Times app and CNN app, and it didn’t work. We had to use their websites in Chrome instead. That said, paywalls were also an issue. Even when signed in to The New York Times in Chrome, Google Assistant can’t read paid text. You also have to put up with ads and pop-ups while an article is being read to you.

Finally, Read It only works consistently in Chrome. We noticed that Chromium-based browsers like Vivaldi and Brave didn’t work with this feature.