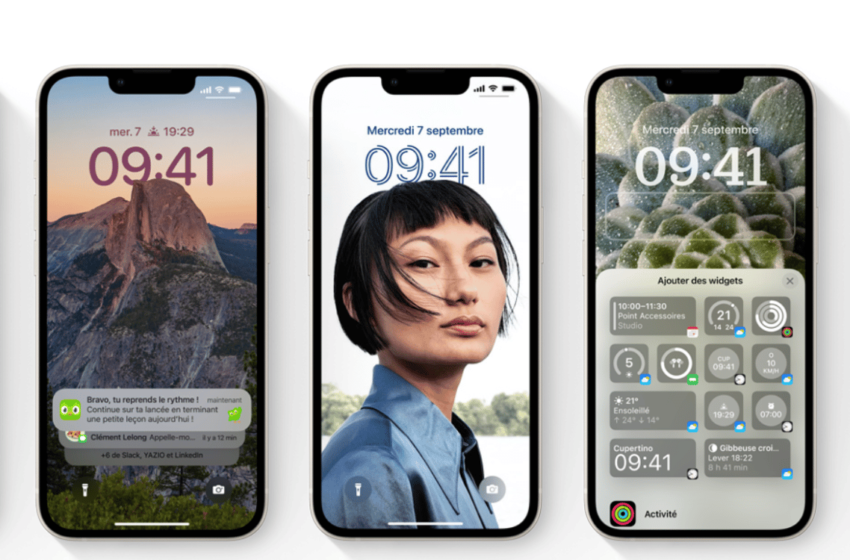 iOS 16 offers you to customize the lock screen, but there are limits

iOS 16 is finally available. Among the new features brought by this update, we note that you can now customize your iPhone’s locked screen a little more.

iOS 16 is finally available. Thanks to the new edition of the operating system for iPhone, it is now possible to create several personalized lock screens. It’s not just about changing the photography of wallpapers, but about modifying the interface to your liking. Apple has used Artificial Intelligence to give wallpapers depth. The clock thus passes in front of (or behind, depending on) the objects and people present in the image. Eight different customizable clock styles are now offered for the lock screen.

Many other things are also configurable. It is possible to tint or add a filter to the screen, you can change font, the widgets offered should be useful for tracking the progress of your meal delivery without unlocking your device. Note also that Apple will open the API of locked screen widgets to developers. A number of original widgets should therefore appear in the coming months.

With iOS 16, Apple still does not change the essentials

Despite all these improvements, some gloomy minds will still say that the changes made are only cosmetic. And they will not be entirely wrong, because as often with Apple, the possibilities offered by the new operating system are more of a slight touch-up than a complete revolution. If you have a compatible iPhone and want to install iOS 16, yes, it’s beautiful, and “it works”, but unlike Android devices, customization has its limits.

It is thus not possible to move the widgets. iOS 16 determines their location for you. The same goes for the clock which will remain fixed at the top well in the middle of the screen. In the same vein, widgets are not shortcuts, they simply open the corresponding application, in terms of usability, this is a missed opportunity. Latest iOS 16 Lock Screen Complaint: the Live Activities widgets API is not yet available to third-party developers. If the promise made on their site to “check the score of a match or follow the progress of the delivery of your meal without unlocking your device” is interesting, it will actually take a while to enjoy all these features.