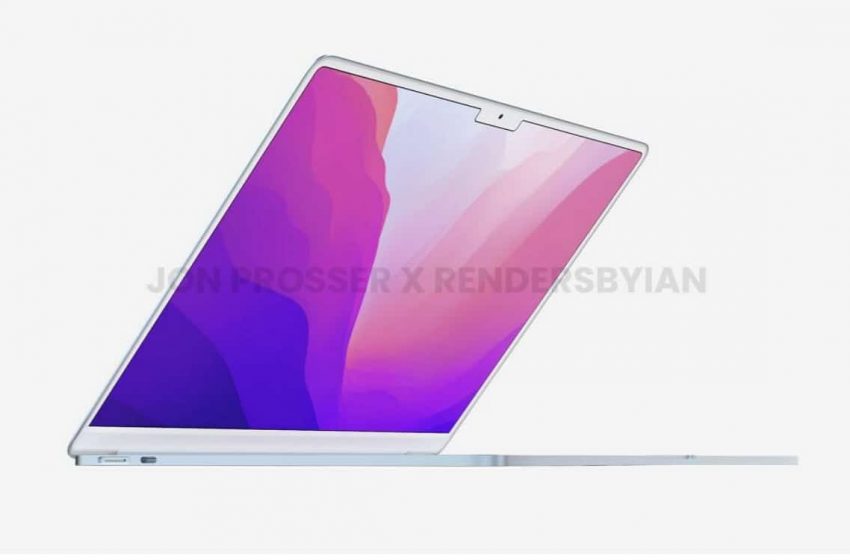 MacBook Air 2022: new design with a notch, Apple will be inspired by the Pro models

Apple has just unveiled a new generation of 14- and 16-inch MacBook Pros, and we already know that its future 2022 MacBook Airs should take a lot of inspiration from the new features introduced on high-end models.

The leaker Jon Prosser had unveiled last May that the next MacBook Air M2 would be inspired by the design of the iPhone 12 and adopt the same colors as the iMac, but no details had been leaked concerning its screen. Now we know that 2022 MacBook Airs may adopt the same notch than the 14- and 16-inch MacBook Pros that were unveiled last week.

Jon Prosser has therefore unveiled new renderings, which are also based on statements by leaker @dylandkt from a few days ago. The presence ofa 1080p webcam as on the 14 and 16 inch MacBook Pro would be in particular a good indication of the arrival of the notch. The leaker also announced that Apple would also equip its MacBook Air with a MagSafe port (compatible 30 W). We will also find two Thunderbolt 4 ports which will allow up to 2 additional screens to be connected as well as a 3.5 mm jack socket. However, we will not find an HDMI port or a port for SD cards.

As the renderings reveal, we notice that the MacBook Air will adopt white borders all around the screen, as well as’a white keyboard with function keys as big as the others. This is therefore a significant change from the MacBook M1 of 2020, which adopted a black keyboard and borders.

Inside, we will find a new home processor from Apple: the M2. This would be a minor improvement on last year’s M1 chip, since there will still be 8 CPU cores. However, at the GPU level, we would go from 7 or 8 cores on the M1 to 9 or 10 cores on the M2. We will therefore not achieve the performance of the new M1 Pro and M1 Max chips from the 14 and 16-inch MacBook Pro. The new M2 chip should again be accompanied by a passive fanless cooling, which will allow the laptop to be extremely thin.