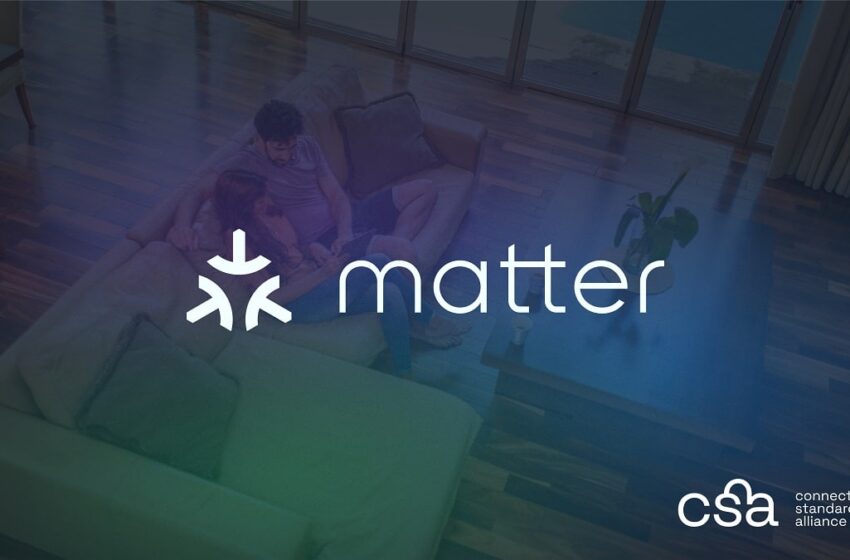 Matter is a very recent standard that promises to revolutionize our use of connected objects and our relationship to home automation. Its objective is to simplify as much as possible the installation, configuration and daily use of the devices in our home, and to allow them to communicate with each other.

Home automation is gradually gaining ground in our homes, which are increasingly equipped with connected objects to facilitate home control and save energy. But due to compatibility issues between the different ecosystems and protocols used, it is not always easy to set up the smartest and most operational connected home system possible. Consumers have been aware of this for a long time, and manufacturers of connected objects are finally tackling this difficulty. To do this, they draw a new weapon: mattera connectivity standard whose purpose is to make the connected terminals communicate with each other, and to control them via a single interface.

Matter, what is it?

Matter is a new home automation standard designed to simplify the installation and configuration of connected devices. It is also used to ensure their support in a wide variety of software and hardware environments, their interoperability, and their proper functioning with the various voice assistants. It will therefore be much less painful than now to build a smart home using products from different manufacturers and belonging to divergent ecosystems.

To sum up, Matter will help all connected devices to communicate effectively with each other and help to democratize home automation among consumers who were still reluctant, hampered by all its drawbacks before the arrival of Matter. “By collaborating, being inclusive, and through a deep sense of responsibility to the marketplace and consumers, Matter has the power to create a more connected, safe, and useful smart home.”summarizes Tobin Richardson, president of the organization in charge of developing and managing Matter.

At the end of 2019, a working group was formed to set up the project Connected Home over IP (CHIP). The ZigBee Alliance, the organization behind the protocol of the same name, was then joined by the big names in tech and the IoT: Amazon, Apple, Google and Samsung. In 2021, the project becomes concrete with the creation of the Connectivity Standards Alliance (CSA)a consortium bringing together members of the CHIP project and new players, who contribute to the establishment of the new standard and its adoption.

The publication of version 1.0 of Matter took place on September 30, 2022, but the official kickoff of the protocol was launched on November 3, 2022. From this date, manufacturers can therefore offer Matter on products marketed to the general public. Good news, it’s not just new terminals that benefit from it since deployment by remote firmware update is possible on the existing fleet of devices.

For example, Samsung was one of the first manufacturers to make Matter available on its SmartThings ecosystem in this way, thus making it possible to control its compatible devices from a single application rather than through a host of apps. Amazon has announced that some of its Echo connected speakers will switch to Matter before the end of 2022. Some eero network equipment will also benefit from it. Nanoleaf also plans to quickly adopt the protocol on early lighting solutions. To date, approximately 200 products are already certified or in the testing phase with a view to obtaining certification.

According to the CSA, two major updates to the standard are planned each year, making it possible to add functionality, improve security, and integrate new types of products into the protocol. Matter will not impose itself immediately, but it should be democratized in a few years if the technology keeps all its promises. Some specialized e-commerce sites have even started to add a Matter category, with the possibility of filtering only compatible products.

The next big event for the next-generation protocol is CES 2023, the world’s largest tech trade show, which takes place from January 5 to 8 in Las Vegas.

Which devices are Matter compatible?

For other types of devices, we will have to wait for future protocol developments. The CSA has already announced that it is planned to make the following devices compatible:

Matter works with the 2.4 GHz frequency band, which is by far the most used by connected objects. The protocol relies solely on theIPv6, which automatically excludes devices that only support IPv4. To associate a compatible device with the network, Matter uses the Bluetooth Low Energy standard. Communication between the device concerned and the others takes place via technology Thread, which shares many commonalities and offers similar performance to Zigbee. The main advantage of Thread is that it does not require a hub or a bridge to operate, which has harmed the development of Zigbee. Another benefit of Thread is that it forms a mesh network of compatible devices, each of which is used as a relay point to extend coverage. WiFi and Ethernet connections can also be operated with Matter, but Thread is less power-hungry than WiFi.

What is the Multi-Admin feature for?

It is Matter’s Multi-Admin which allows you to control your connected objects from an application other than that provided by the manufacturer of the device. And if the companies collaborate with each other, it is even possible to offer a completely transparent experience, with the possibility of accessing all the features available from a third-party interface. Google and Samsungwho are already collaborating on Tensor chips for Pixels and have merged Wear OS and Tizen on smartwatches, announced they are working together to build bridges between SmartThings and Google Home using Matter’s Multi-Admin.

What features are supported by Matter?

In its first version, Matter shows itself again limited in functionality. Certain advanced options or the implementation of routines are not necessarily available at the moment depending on the product. The protocol will become more complete with updates. With Matter, it is notably possible to turn a device on or off, or to activate its basic function. For a more advanced experience, the standard is not yet ready.

As with Zigbee, speed and simplicity are the key words. A QR Code to be scanned on the product with the smartphone or a code to be entered identifies the device to be configured, then Bluetooth LE takes care of making the connection. The manufacturer’s application is no longer mandatory, it is possible to continue the configuration from a compatible third-party application, such as Smart Life, Smart Things, Alexa, Google Home, etc.

In the future, Matter may even use NFC to make the process even faster and easier. Even better, powering on a device supporting Matter could in the future be enough for it to be automatically detected by the network.

Matter uses blockchain to certify the provenance and security of devices and grant them access to the network. Communication encryption is achieved by 128-bit AES technology, whether between devices in the home automation network or between devices and the cloud. Matter also authorizes data exchanges between cloud-to-cloud devices, and is therefore not concerned with information security.

Does Matter work on iOS?

Apple is one of the participants in the development of the standard and intends to make its products compatible with Matter. However, currently on iOS, the Alexa and Google Home applications do not support the new standard: only Apple Home allows it.