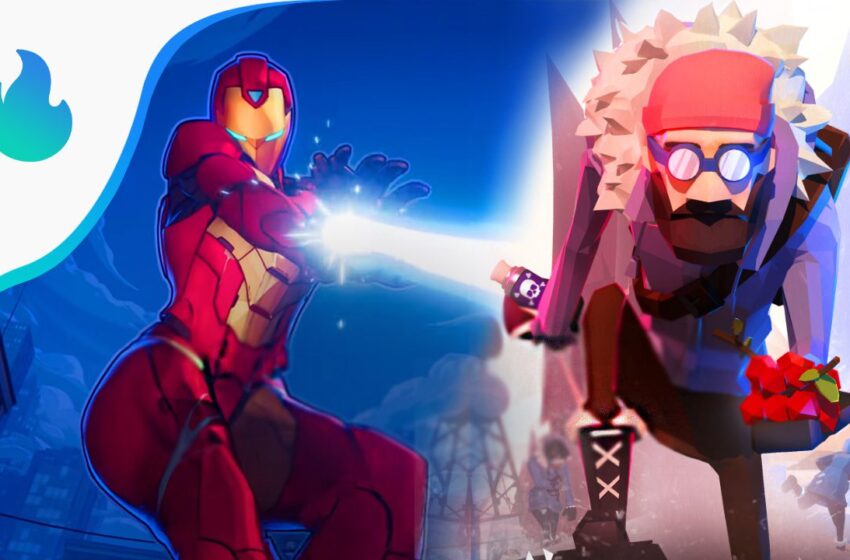 Discover it weekly recap of mobile gaming news on Android and iOS for the week of May 16 to 22, 2022! On the program this week: new Apex legend on mobilethe set 7 TFTsnews from Battelfield and eFootball and much more to discover in this recap. We let you read all about it below. ⬇️

1️⃣ Let’s start this recap with the release of Apex Legends mobile. A faithful adaptation of the original game, this port made by Respawn Entertainment is now available on Android and iOS worldwide. The title benefits from a very dynamic gameplay with jumping, sliding and special skills unique to each character for play styles suitable for all. The 9 first Legends of the game original land on mobile. At their side, we discover a new recruit by the name of Bland. Mobile Exclusive, Fade is a military tech hunter able to deny damage and rewind time.

2️⃣ This week, two Disney games were talked about. First, Disney Mirrorverse opened on TapTap ahead of its global launch across all stores for a official release on June 23. Famous heroes and villains from the Disneyverse find themselves in a world to defend, united against evil creatures to come to the aid of Grand Wizard Mickey. It is slightly reminiscent of skylanders framebut the result is a Pretty classic gacha RPG with a strategic aspect of team composition. Check out Disney Mirrorverse ahead of its full release right now on TapTap.

3️⃣ Another Disney game to be in the spotlight, star wars hunters is deploying its French version this week and opening up to Oceania. In addition, a jump mechanic is making its appearance in the new patch, and we can’t wait to discover it in Europe.

4️⃣ Even if the release of Dislyte and Apex made a lot of noise and delighted many players, some are waiting for the arrival of other licenses, in particular Battlefield Mobile. To discover Battefield on your smartphone, you will need wait until 2023. In any case, this is what we learned during the financial presentation of Electronic Arts for its fourth quarter. The firm’s CEO, Andrew Wilson, said that after the end of May test phase, Battlefield mobile would go through a global launch later this year or early next year. So this moves Battlefield into an increasingly crowded market, with Call of Duty mobile, Apex Legends mobilePUBG mobile and Rainbow Six mobile at the heights of competitive FPS engagement.

5️⃣ Let’s leave the sniper sights aside to put on our colorful bodysuits. New license title on mobile, Power Rangers Morphin Legends begins its gradual exit through Vietnam and the Philippines. This Gacha RPG with turn-based battles offered by nWay takes up the emblematic lore of the license with its most famous characters, antagonists and environments such as the dai shi temple.

6️⃣ Still on the RPG side, Fableborne intends to launch its alpha in the summer of 2022. The title integrates NFT technology into a vast multiplayer action RPG. All in isometric viewFableborne invites you to build your colony on an island and strengthen it to face enemy attacks, before going yourself to try to plunder the wealth of your neighbors. Your PvP battles are asynchronous, much like Clash of Clans, and PvE earns you bonus rewards to grow faster.

7️⃣ Only available on iOS at the price of 10 euros, Dysmantle came out this week. A survival game in an apocalyptic world, Dysmantle places you on a scary island where you will have to collect resources, cook, fish, cultivate the land, hunt enemies and craft as much as possible to escape death. In this game, you can destroy almost anything, really almost anything, with a pickaxe, a shovel and a great will to destroy. Finally, Dysmantle allows those who suffer from psychiatric version of a Fortnite disease and who cannot manage to let go of their pickaxe in real life to pursue their destruction elsewhere.

8️⃣ Let’s take a nostalgic leap into the past with Voodoo Detectivea hand-painted point-and-click adventure game reminiscent of Monkey Island. The plot takes place in 1934 on an isolated island steeped in voodoo culture. On the island, you, the Voodoo Detective, are hired by a completely amnesiac woman to find out who she is and what happened to her. In this game, your strange investigation is punctuated by voice-overs and a quality soundtrack, to fully immerse you in the atypical universe of Voodoo Detective, to be discovered from the May 24 on Android, iOS and PC.

9️⃣ What if our goal for 2032 was to put our old skates back on? In any case, this is what Ubisoft offers us to do virtually with the Roller Champions release May 25. Unfortunately, the launch of the title on mobile will not happen immediately, so it will be necessary to wait a little before being able to take advantage of crossplay on Android and iOS. An original free to play game, Roller Champions sees its 3v3 players on skates. To win, you will have to score, do laps and outsmart your opponents, without stopping rolling.

🔟 Ubisoft is not content with a future launch of Roller Champions on mobile and is silently pursuing its testing phase for Wild Survivors, his next Battle Royale. Alone against all, select the Survivor of your choice and fight in a 40 player mode. On the island of confrontation, search for resources to gain an advantage over other players and dominate wild creatures. Wild Survivors is a bit of a billionaire fad that gives a Huge Hunger Games with crazy adrenaline and violence on the pitch. You can play solo or in a trio to alternate strategies and learn to master all the brutality of this island.

1️⃣1️⃣ The Project Winter 8-player betrayal game got a new beta this week. With no definitive release date yet, the mobile port of this social survival experience will have you suspecting every one of your friends, just like in Among Us. Expect any of them to sabotage your work of survival, from repairing gear to gathering resources. Or, if you’re the traitor, make sure all their efforts are wasted and you’re the only one to make it out of Project Winter alive.

1️⃣2️⃣ Lovers of strategy and auto-chess, you will certainly be delighted to learn more about Set 7 of TFT. Entitled Dragonlands, this set is obviously placed under the sign… of the dragon. To open the ball of novelties, a dragon trait makes its appearance. Shared by 7 characters, it considerably increases their cost to purchase. At the same time, the augments are back, with already known hextech improvements and new features like the Sacrificial Pact which will allow you to exchange VP for XP. TFT Set 7 will arrive June 8 on live servers and the May 24 on the PBE with patch 12.11.

1️⃣3️⃣ This week, Subway Surfers celebrates 10 years of existence. Whether you are rather Team Temple Run, Jetpack Joyride or Subway Surfers, we must recognize the incredible success of the game since its launch. Incidentally, the studios behind the game have also released new runners, like Metroland and Brimblade, each on their own. Despite its rather short content, I really recommend Brimblade which takes racing to a whole new level thanks to its impressive verticality and its very good combo sensations. Go and test him to celebrate his big brother’s birthday if you don’t know him yet.

1️⃣4️⃣ The mobile game asserts itself a little more each year as a serious market in full swing and which deserves our interest. This is not limited to its enormous financial potential, but also extends to all the efforts of the studios to produce quality titles. Recognized this week by a nomination to the Game Audio Network Guild (GANG for short) for the best original song, Robert Wolf owes his success to the beauty of the “Immutable” track which he made for the mobile game Arknights. This music was nominated alongside other original soundtracks such as call of duty vanguard, Halo Infinite or League of Legends. We’ll know the real winners May 25 via the ceremony broadcast on Twitch.

1️⃣5️⃣ Postponed indefinitely until now, the launch of eFootball 2022 has finally found a new release date, so expect to strap on your cleats on June 2 to give it your all on the pitch. We still hope that the devs will have managed to fix matchmaking bugs which seemed to weigh on the mobile porting of the title.

1️⃣6️⃣ We just discovered the Marvel Snap collectible card game with a reveal a few days ago. Made by ex-Hearthstone developers, Marvel Snap mixes inspired by Gwent and Hearthstone for a combo that intends to do justice to the Marvel multiverse. Decks consist of 12 unique cards and all of the game’s maps will be available simply by playing the free-to-play title, on mobile or on its PC emulator which will surely arrive alongside the global launch on Android and iOS. In any case, this was assured Second Dinnerthe studio behind Marvel Snap.

1️⃣7️⃣ If you need a little crime before summer, don’t count on GTA Trilogy Definitive Edition. Even though the game of Rockstar license was supposed to be released in June 2022, some recent information indicated that it would finally be pushed back, and we had confirmation of this this week. So don’t expect to get your hands on the iconic GTA trilogy on mobile until March 31, 2023.

1️⃣8️⃣ On the update side, the Genshin Impact Update 2.7 is still waiting, and information about the 2.8 update is starting to flow. Among this information, we discover Shikanoin Heizou, a new 4-star Anemo character. The first male hero to use a catalyst, Shikanoin uses no other weapon than his feet and his fists to undermine his opponents. Discover the gameplay of this new hero in our dedicated article on JeuMobi.com.

1️⃣9️⃣ To stay in the colorful universe built by miHoYo, let’s look at its new games. Among them, Zenless Zone Zero invites you to subscribe to its closed beta until tomorrow. This new title of Hoyoverse does not reveal much except its graphic style, a few characters and a little gameplay oriented exploration of dungeons with several people, but if you are curious to test it, this is the opportunity!

2️⃣0️⃣ If you like Counter-Strike or Rainbow Six Siege, the new installment in the Special Forces series may convince you. Of his name Special Forces Group 3 the title takes up in early access everything that made the success of these titles: nervous tactical shooter gameplay with more than 40 maps and multiple game modes, to go through a game in the blink of an eye Capture The Flag at a Deathmatch or planting a bomb. That gives you one more FPS to test with Apex!

2️⃣1️⃣ Finally, let’s end this recap with Arat TPS: MOBAa very strange mix between MOBA, shooter and social universe à la VR chat. Inspired by Overwatch and other titles of the genre, Arat also relies on the links between players to spice up its gameplay since your relationships with your friends and your possible crushes in-game should influence your team composition with a weird romance mechanic. Not sure if this is a step in the right direction for the metaverse, but some developers already have their own idea on the matter.