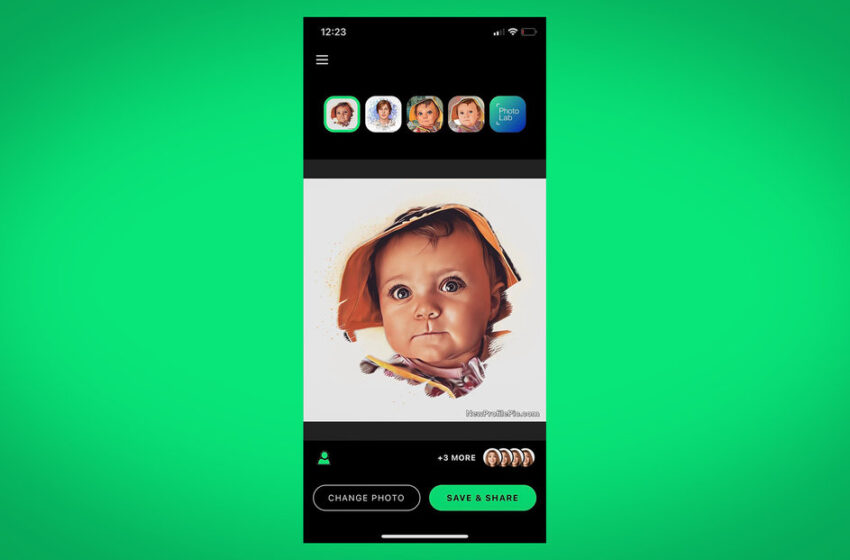 New Profile Pic app: How to get artistic selfies and is it safe?

(Pocket-lint) – Many Facebook, Twitter and other social media users are changing their profile picture into an artistic, cartoon-like portrait of themselves. That’s because a new app – officially called “NewProfilePic Picture Editor” – is trending on the Google Play Store and Apple’s App Store for making it incredibly easy to turn your selfies into art.

Here’s everything you need to know about the New Profile Pic image editing app, including whether the experts think it’s safe to use.

What is New Profile Pic app?

The New Profile Pic app rose to the top of the mobile app chart in May 2022, with hundreds of thousands of downloads.

People everywhere are sharing on social media their photos which they have edited with New Profile Pic. The app uses artificial intelligence to easily and quickly create profile photos that look like they’ve been painted. But as quickly as its popularity exploded, rumors started circulating on the internet that the app was linked to Russia or the Kremlin in some way.

How does the New Profile Pic app work?

It is very simple. First, download the app on your iPhone or Android phone.

The app will ask for your permission to track your web activity in order to serve you personalized advertisements. But you can ask the app not to track you. It also asks for permission to send notifications and, later, permission to access your photos. It claims that any photos you edit in the app are anonymously uploaded to its servers for processing.

You can allow access to some photos in your library or to all of your photos.

Once you have obtained all necessary permissions, the app’s main screen will open and ask you to choose a photo. You can take a photo using your device’s camera or select one from your photo roll and folders. If you don’t want to use your own photos, there is an option for celebrities. Below, you can search for a celebrity’s name to find a photo of them to edit in New Profile Picture.

Either way, after taking or selecting your photo, New Profile Pic gives you a choice of four artistic styles. Under the first style, there are three additional aesthetics to try. You will also find additional options under the second style and fourth style. Pro Tip: Quickly touch all the styles in a row to get them processed, then when they’re done, you can switch between them. It takes a few seconds for the styles to be processed and applied to your photo. The first style is our favorite. It turns your photo into a hyper-realistic painted portrait.

Remark : the Photo Lab option you see just directs you to another app from the developer to try.

You have finished your photo and want to save and share it. Just hit the green Save & Share button at the bottom of the screen! You will then have the option to save it locally on your device or send it to Instagram, Facebook, WhatsApp, Messenger, Snapchat and other applications installed on your device.

Yes, New Profile Pic app is free to use. As of now, there doesn’t appear to be any paid features or subscription tiers. However, there are advertisements. They appear between style selections.

Can you remove the watermark?

There doesn’t seem to be a way to remove watermarks from processed photos in the New Profile Pic app itself, but you can always resize/crop the photo on your device afterwards to remove the watermark before sharing .

The rumor that the New Profile Pic app is linked to Russia or the Kremlin is based on screenshots shared on Facebook that show the app’s website (newprofilepic.com) registered in Moscow. Snopes did a thorough review of the app and noticed that New Profile Pic was created by Informe Laboratories and is protected by Linerock Investments. According to the app store listings on Google Play Store and Apple App Store, the developer is located in Tortola, British Virgin Islands.

But a Linerock Investments spokesperson has already confirmed to the media that the app’s website domain was registered in Moscow. This is explained by the fact that the founder of the company lived in this country. However, since that person has since moved, the company changed the domain’s registration address “to avoid confusion.”

Russia-related concerns aside, experts warn that the New Profile Pic app collects vast amounts of personal data, according to The Independent. Pocket-lint downloaded the app to review its permissions. As of May 12, 2022, the permission requests we saw were very much in line with what other popular apps (like TikTok and Instagram) ask for.