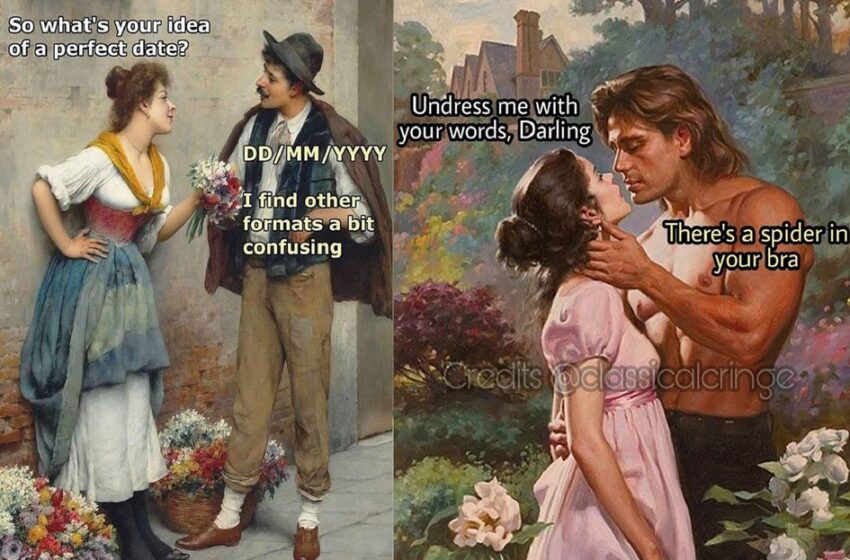 People Turn Classic Art Into Memes: These Are The Funniest

(Pocket-lint) – Memes are awesome, aren’t they? But how many times have you ever seen a classic painting or artwork turned into a meme? Not many we bet. We’ve discovered a trend where people are turning quirky artwork from years past into fun modern memes.

For your personal amusement, we’ve rounded up some of the most entertaining ones for you below. If you want to see more, we recommend checking out the Classical Cringe and Classical Damn Instagram page.

The woman cuts the kimono

Here Classical Damn added a bit of humor to the image with the idea that the woman cut her Kimono so as not to disturb the cat.

woman on a bicycle

We don’t know what this lady was involved in, but here she was pictured (in a rather fancy dress) riding around on a bike chopping heads off.

Do not dispute the knowledge of a wise person. Unless you want them to pull out their pen.

We love this one. People Instagram their food all the time and others will say it’s a horrible modern trend. But people have been doing it for years.

Jesus performed many miracles, but perhaps his greatest and least known is simply having a dozen close friends in their thirties. How many people can say they have that?

Cats are demanding creatures. Here, the fun meme imagines these kitties have lost their owner but are still feeling peckish and using a ouija board to contact them for food.

The humor of this one is perfected by the lady’s sad gaze and sidelong gaze. She’s not having a good time, maybe because she was expecting a little more than just a poetry reading.

This is the Saint Columba Altarpiece also known as the Adoration of the Kings which dates back to around 1455. It depicts the birth of Christ and sees him with Mary and others. In the background, an icon of Christ on the cross. A spoiler alert for the future.

The meaning of life

If you could ask God why we exist and why he gave us life, what would he say?

This meme imagines a modern reflection on an ancient action.

Did you also buy random things during the pandemic lockdown? This guy certainly has. He even managed to buy himself a small dragon to walk around.

In this painting, it looks like this encircled woman is trying to sell clothes with the image of Christ on the front. He looks back while carrying the cross on his back, clearly not too happy about it.

What did people do to show off their amazing creations before the internet? Paint a picture or parade through the city showing their creation?

Wales or Whales? These are not things you should be confused about when talking to women.

A classic meme applied to an equally classic painting. What’s not to like?

This one appears to be the cover of a classic romance novel, rather than a proper painting or artwork, but it’s still a brilliant meme.

Someone has to be in charge of ordering food and naturally it should be the less drunk person. But when there are enough, it will be carnage.

Worse than the friendzone?

If you’ve ever been in the friendzone, you know how difficult it is. But it must be worse. We both chuckled and felt a pang of pity for this guy.

We all have a friend like this, who makes you feel old and out of touch with current memes. Thinking they’re above us, sitting on their own throne.

Sometimes when you’re feeling down, a simple meme can be enough to make you feel better about yourself. We had never thought of Red Riding Hood like this before.

Leave the oven on

Have you ever done something important and realized you forgot something else that is equally important? The house can’t burn down while you’re at war, that would be embarrassing.

Pay too much attention to old Christian paintings and artwork and you’ll start noticing this stuff. Why does Jesus carry a cross? Isn’t that a strange move for him?

These paintings of Henry VIII’s wives have clearly been updated to show them with beaming smiles because there’s no way they could be this happy with their life with the king.

Where do babies come from?

The conversation about birds and bees is tough enough at the best of times, but imagine trying to have it about the Immaculate Conception.

If you’ve ever had a house cat who isn’t allowed outside but insists on trying, then you know what this is all about. Here, the hilarity takes on a retro feel thanks to this antique statue.