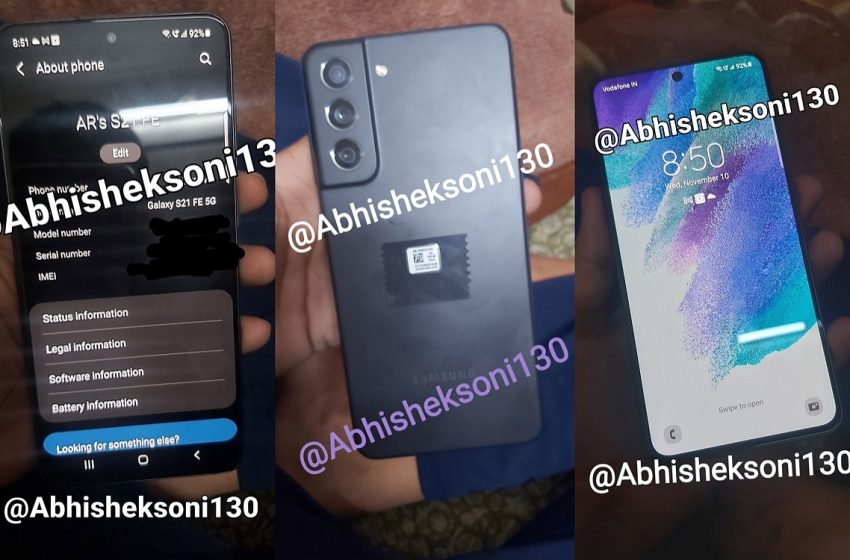 Samsung Galaxy S21 FE: stolen photos of the flagship killer reveal everything before its launch

Samsung has yet to officially unveil its Galaxy S21 FE, but the smartphone has already found its way several months before its release, and there is now no room for doubt about its design and technical characteristics.

On Twitter, a user named @ Abhisheksoni130 shared the first stolen photos of the next flagship killer from Samsung, the Galaxy S21 FE. The phone is expected to be unveiled by Samsung during an Unpacked event on January 4, but the first copies seem to be circulating among the community already.

Only a few days after official images leaked onto the web, so we are now entitled to our first glimpse of the smartphone itself, although we have also already been able to see the rear covers of the device, since these had been sold as spare parts.

On his Twitter account, @ Abhisheksoni130 confirms most of the information that has previously leaked. The smartphone does offer a plastic back as was already the case on last year’s Galaxy S20 FE, and the 3.5 mm jack and the microSD port are missing. Samsung really seems to want to abandon the headphone jack on all its smartphones, since it also intends to remove it from its next more affordable models of the A range, such as the Galaxy A33.

The version @ Abhisheksoni130 owns is powered by a Snapdragon 888 processor, but we should be entitled to an Exynos 2100 in Europe, as on the other smartphones in the series. On the photo side, there are three cameras on the back placed vertically, including a 12 MP main sensor, a captor 12 MP ultra wide-angle and a 8 MP telephoto lens. Selfies are provided by a 32 MP sensor, against only 10 MP on the previous generation. Finally, the Internet user confirms the presence ofa fingerprint sensor integrated into the FHD + 120 Hz screen.

It is not yet clear at what price the Galaxy S21 FE will be sold, but we imagine that Samsung should reduce its price compared to that of the Galaxy S20 FE. Indeed, the smartphone has been postponed many times, and will therefore be launched a month before the new generation Galaxy S22. Samsung must therefore make sure to offer it at a low enough price if it does not want customers to wait patiently for new models.