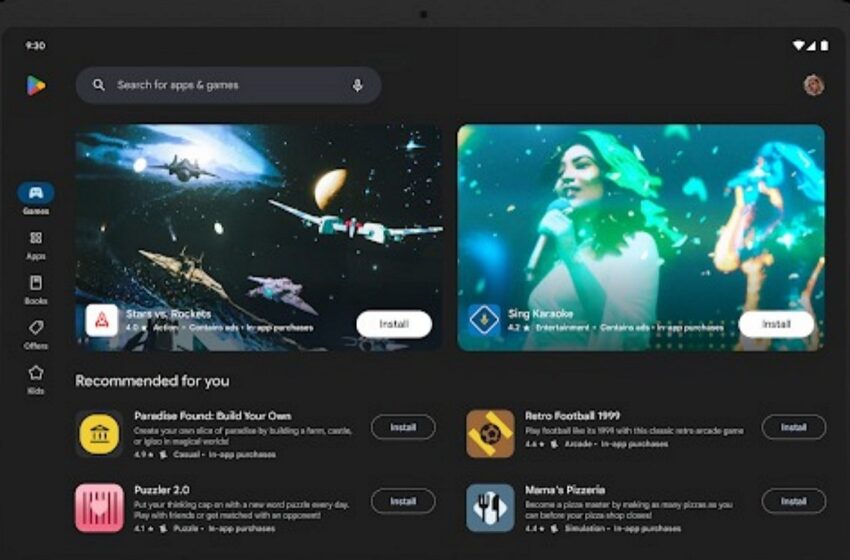 Google has announced new features and tools for developers to showcase their app’s Play Store listing on different devices with larger screens.

A new post on the Android Developer Blog details the changes coming to the Play Store on large screen devices such as tablets, foldables and Chromebooks next year. Currently, the Google Play Store on tablets has a navigation bar on the left that gives you quick access to the Games, Apps, Deals, and Books pages.

In each section, you can find different applications, but information about them is quite limited. For now, the home page only displays the app icon, name, rating, and price. For more information, it is currently imperative to click on the application. However, that may soon change.

Google plans to change this approach with the next redesign, which will bring the app description, screenshots, and videos right to the Apps and Games pages. As you can see in the screenshot above, the games page will feature a brand new layout with app descriptions and screenshots displayed on the main screen.

Google informs that these new implementations on the application will benefit users and developers in every possible way. Also, users will have a clearer view of each app and can easily decide what they want to install on their devices. As a reminder, Google recently banned many misleading and ad-riddled Android apps. These new instructions should therefore help to better identify the most reliable applications.

The search giant suggested that this change could arrive on tablets, foldable smartphones or even Chromebooks as early as next year. Developers can already ensure that their app and its assets display correctly with new, updated content quality guidelines from Google. The company clarifies that this has no impact on the promotion of the app, “only on how your app is displayed in the Play Store“.