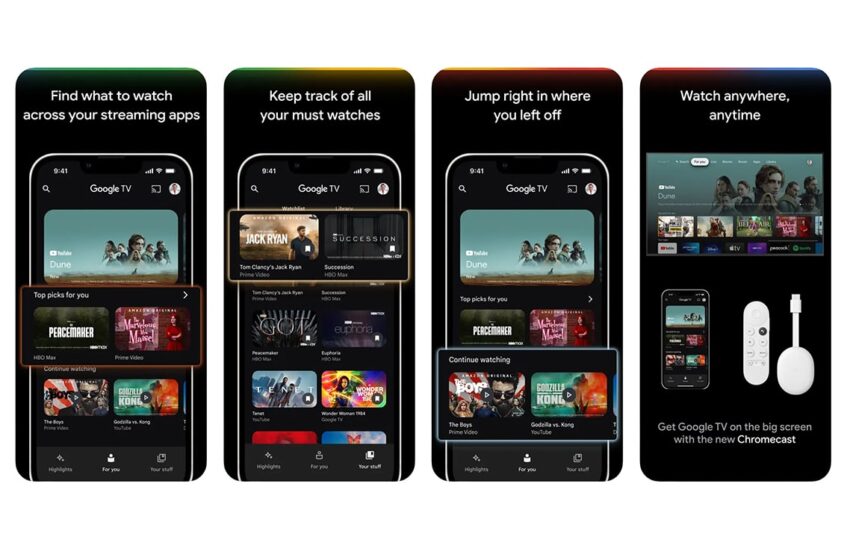 The Google TV app is finally coming to iOS

Two years after its launch on Android, the Google TV application finally arrives on iOS. Via this app, iPhone and iPad users will be able to view films and series purchased on the Google service.

In 2020, Google declared the death of Android TV in favor of Google TV, a brand new interface that draws its inspiration directly from Apple TV, the tenor in the field. Both clearer and more centralized, Google TV concentrates content on a single pagewhether streaming services, photos, installed apps or live TV.

Of course, Google TV also comes with a dedicated appfrom which users can buy/rent series and movies directly on the Google store. Since May 2022, the Movies & TV tab of the Google Play Store has disappeared, the purpose of the maneuver being to entice users to turn to Google TV.

And two years later the Google TV application finally arrives on iOS! Note that it effectively replaces the Google Play Films & TC app available on iOS mobile devices. Through this app, users will be able to watch movies, series and shows purchased from the Google store or synced from iTunes, Amazon and other digital sellers through the Movies Anywhere service.

Be careful however, like many applications that allow you to read digital content, it is not possible to rent or buy movies and series directly from the Google TV app for iOS. For this, it will be imperative to go through the Web version or via an Android device.

Google TV offers many features such as the ability to create viewing lists made up of content from different streaming services. You can also use the app as a remote control for your TV running Android TV OS or Google TV, whether it’s a Chromecast with Google TV, a TCL Google TV or any other device Android TV OS running Android 8.0 or newer. Previously, this feature was handled by the dedicated Android TV Remote appbut it was discontinued last year in favor of the Google Home app and now the Google TV app.