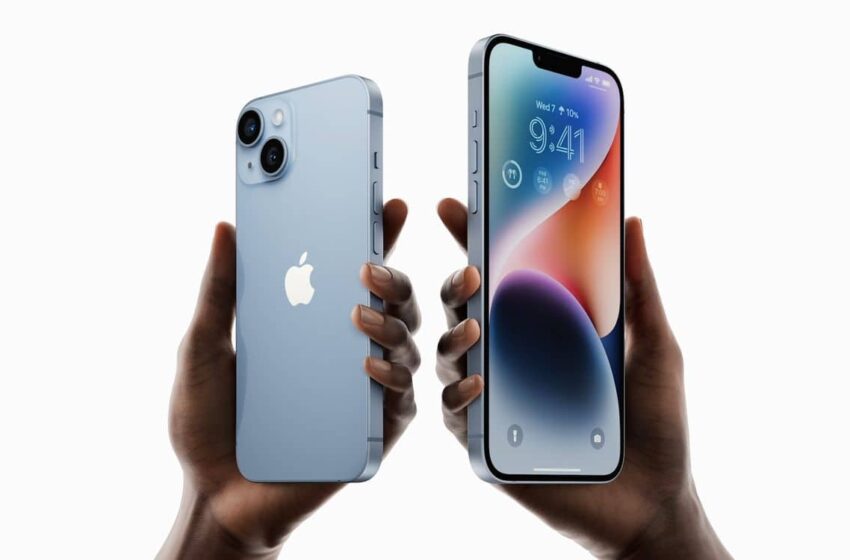 After months of speculation, Apple has finally unveiled its new generation of smartphones, the iPhone 14. Four models have been presented this year, here is everything you need to know about them.

In addition to Apple Watch Series 8, Apple Watch Pro and AirPods Pro 2, Apple also announced this Wednesday, September 07 four new iPhone 14 during its new keynote. Its new high-end devices succeed the iPhone 13 of 2021. This year, no iPhone mini on the program, but a new larger iPhone 14 Plus. 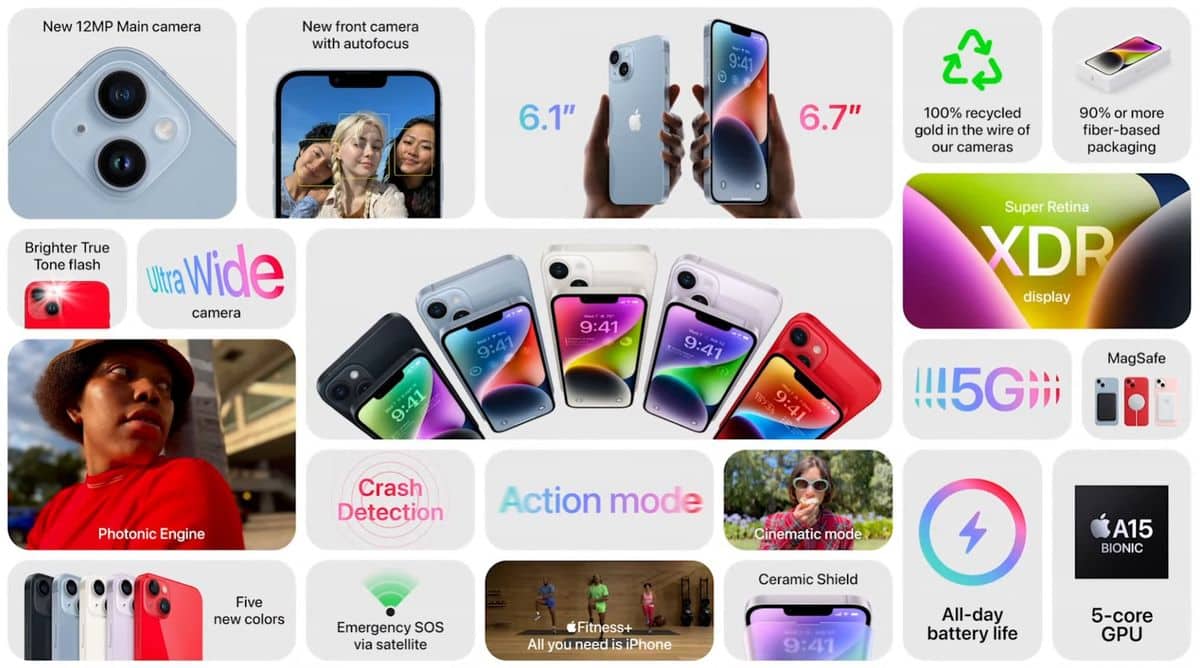 The iPhone 14 and 14 Plus are in no way revolutionary

As expected, the iPhone 14 and 14 Plus feature very little new compared to last year’s iPhone 13. The iPhone 14 still benefits from the same screen 6.1-inch 60Hz LTPS OLED with the same notch as previous models, while the iPhone 14 Plus offers a larger screen of 6.7 inches. Both OLED Super Retina XDR panels will be compatible Dolby Vision, HDR and HLG, with a maximum brightness of 1200 nits.

Apple even reused the same chip from the previous year, Apple Bionic A15, so better performance should not be expected. However, Apple has equipped all devices in the series with 6GB of RAM and a new, more powerful Snapdragon X65 modem (already found in the Snapdragon 8 Gen 1). Thanks to it, the iPhone 14 are now compatible with the Wi-Fi 6E wireless standard. The new modem also makes smartphones less power-hungry, and they are now compatible with satellite connectivity. 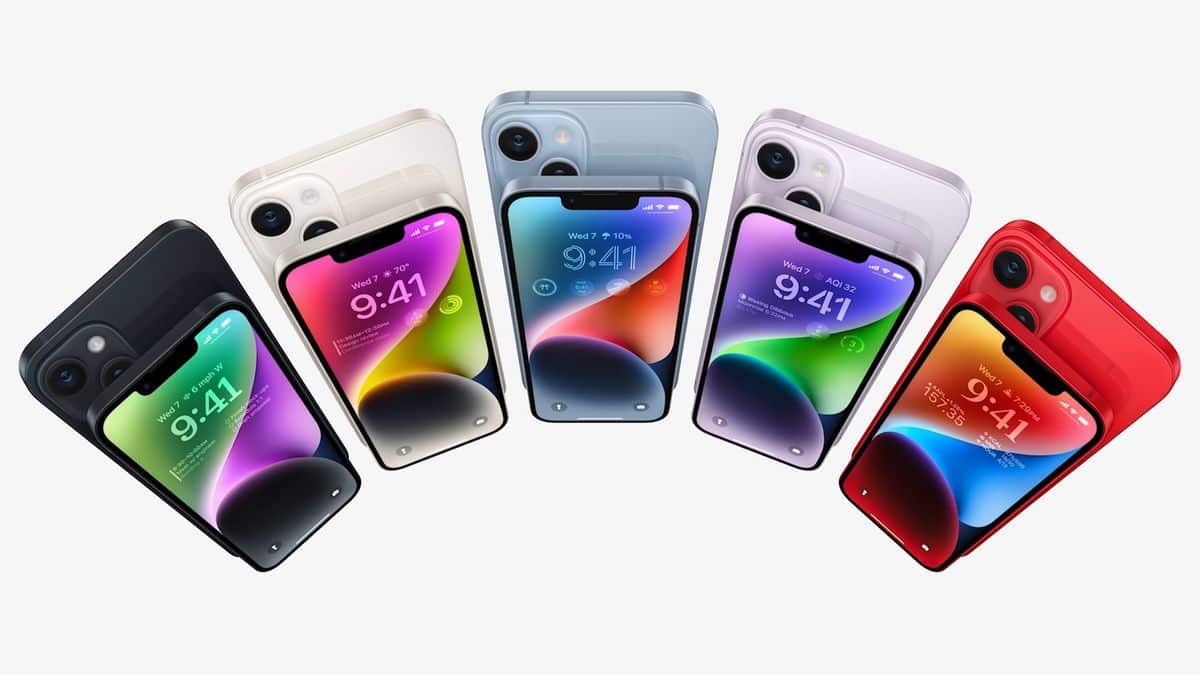 On the battery side, Apple promises the best autonomy ever seen on an iPhone. Unfortunately, it will be necessary to wait a little to have concrete. No estimate was given by Apple, as are the respective battery capacities of the iPhone 14 and iPhone 14 Plus. One thing is certain, however, no USB-C on this generation, the iPhone 14 retain the proprietary Lightning connector.

In photos, smartphones inherit the same cameras as the previous generation. We find a 12 MP main sensor as well as a 12 MP ultra wide-angle sensor. According to Apple, the main sensor offers better performance in low light (+49%). Night mode would also be twice as fast. However, at the front, the two smartphones are entitled to a new front camera with autofocus. This is a brand new sensor 12MP True Depth with f/1.9 aperture. Note also that video recording also benefits from a new stabilization mode called Action Mode. 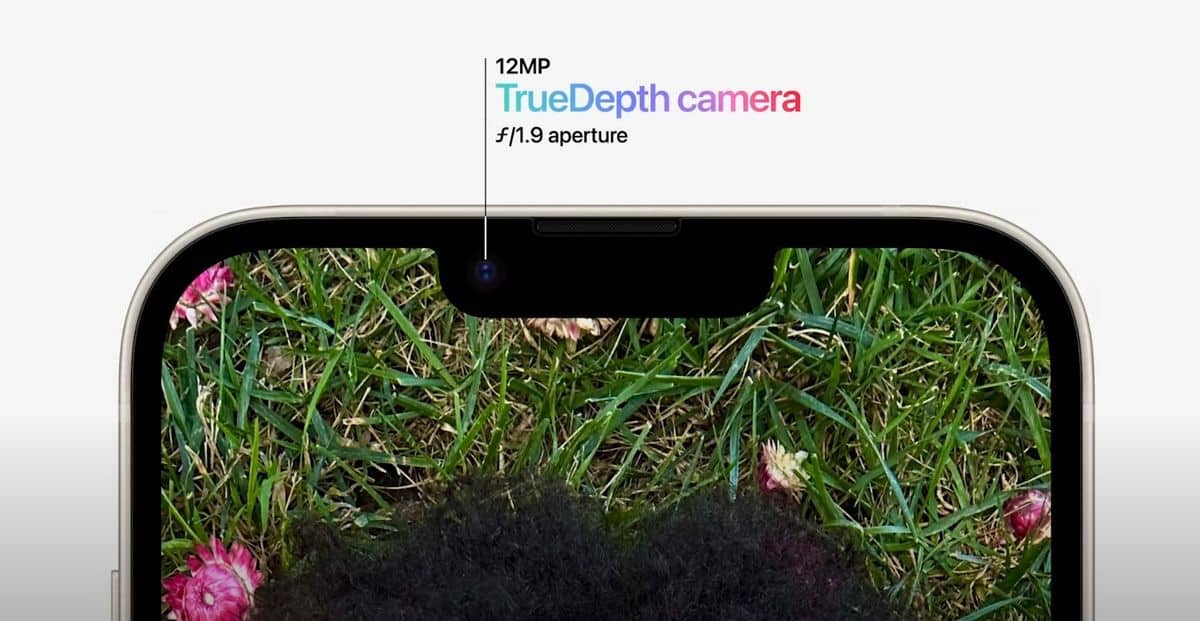 Finally, let’s note some additional new features. As on the Apple Watch Series 8, the iPhone 14 will offer the Crash Detection function, which uses the gyroscope and accelerometer to automatically detect a traffic accident. Simply slide the control to call the emergency services directly. Moreover, in case of insufficient network, it will be possible to make an emergency call via satellite (Emergency SOS), it will be a last resort tool, and not a permanent connection as Starlink can offer for example. 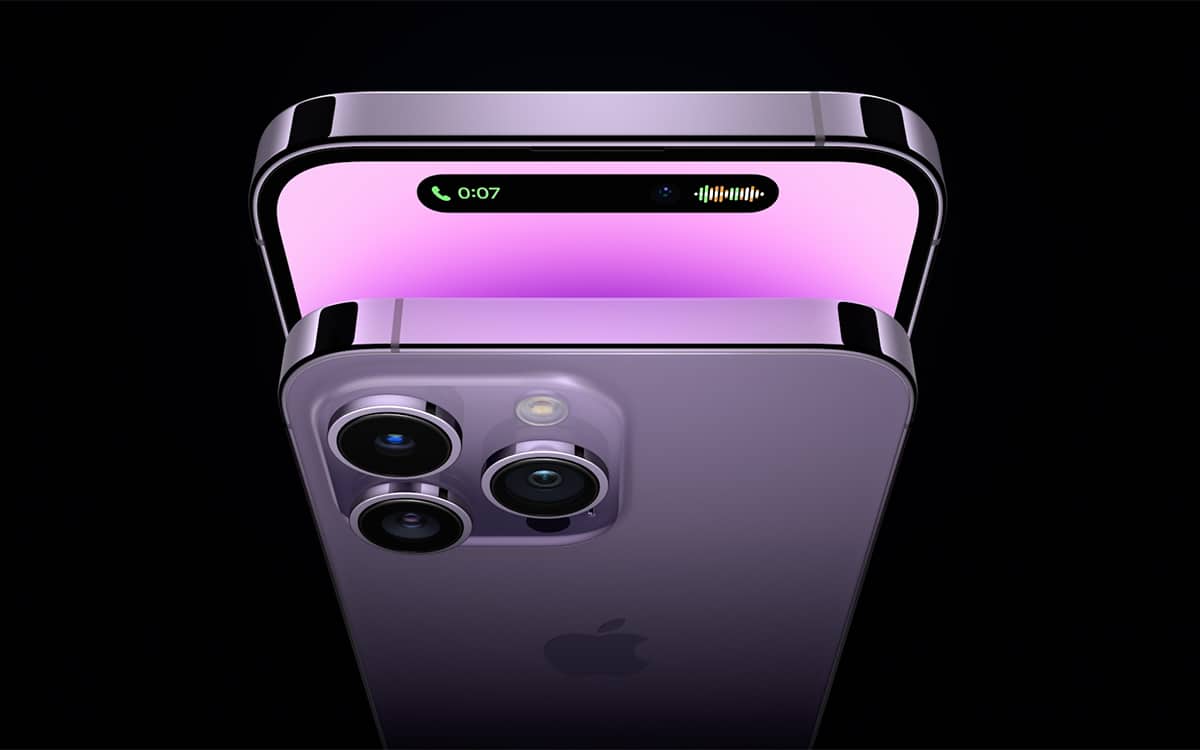 The iPhone 14 Pro and 14 Pro Max are the two smartphones on which Apple is betting this year, because they are the ones that benefit from the greatest number of new features. First, both devices get a new notchless display, with the front-facing camera and necessary hardware for Face ID now sitting in a large pill.

Moreover, the proximity sensor is now under the screen, and notifications will appear under the pill via a new animation. Apple baptizes this novelty “The Dynamic Island”. Notifications and alerts will move around the pillar-shaped notch. 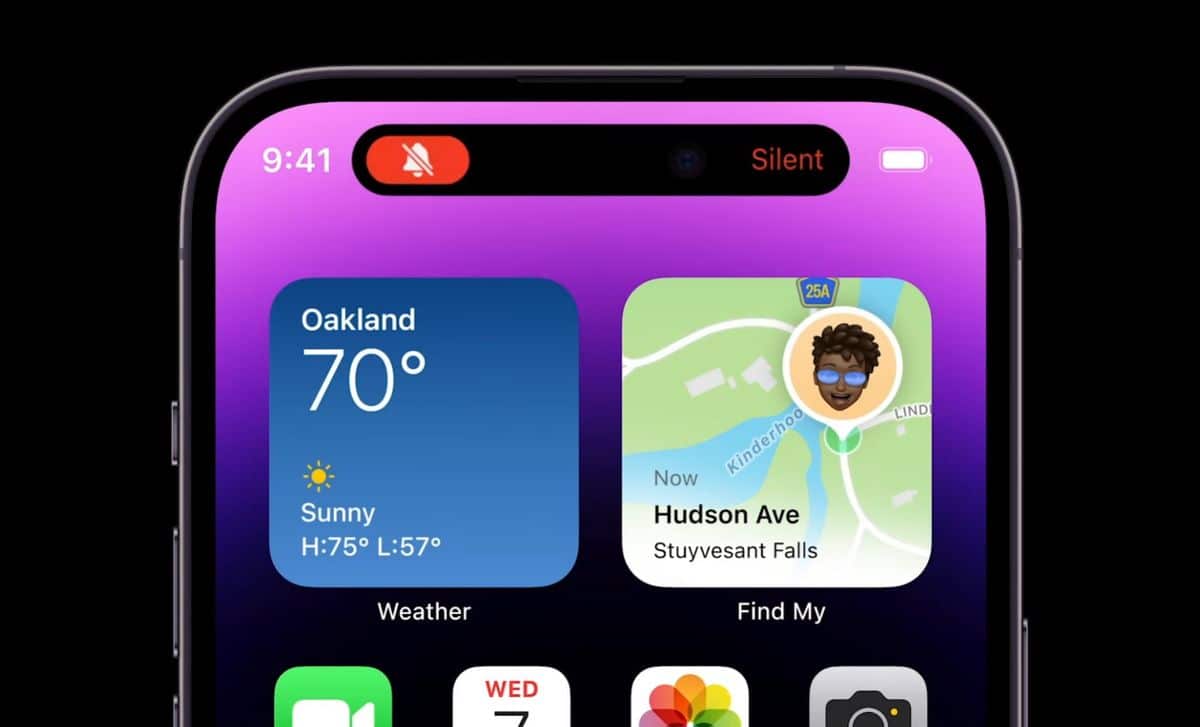 The iPhone 14 Pro screen is still OLED LTPO 120Hz with a diagonal of 6.1 inches, while that of the iPhone 14 Pro Max measures 6.7 inches. Both screens display a maximum brightness of 1600 nits (2000 nits on some videos). The slab is now able to descend to 1Hzwhich prompted Apple to offer on these two models a feature Always Onwhich has been on Android for several years.

The two Pro models are the only ones this year to benefit from a new Apple Bionic A16 processor. The latter is still engraved in 5 nm+ by TSMC, but unsurprisingly promises to be more powerful than its predecessor. The six-core processor includes two high-performance cores that consume 20% less energy. 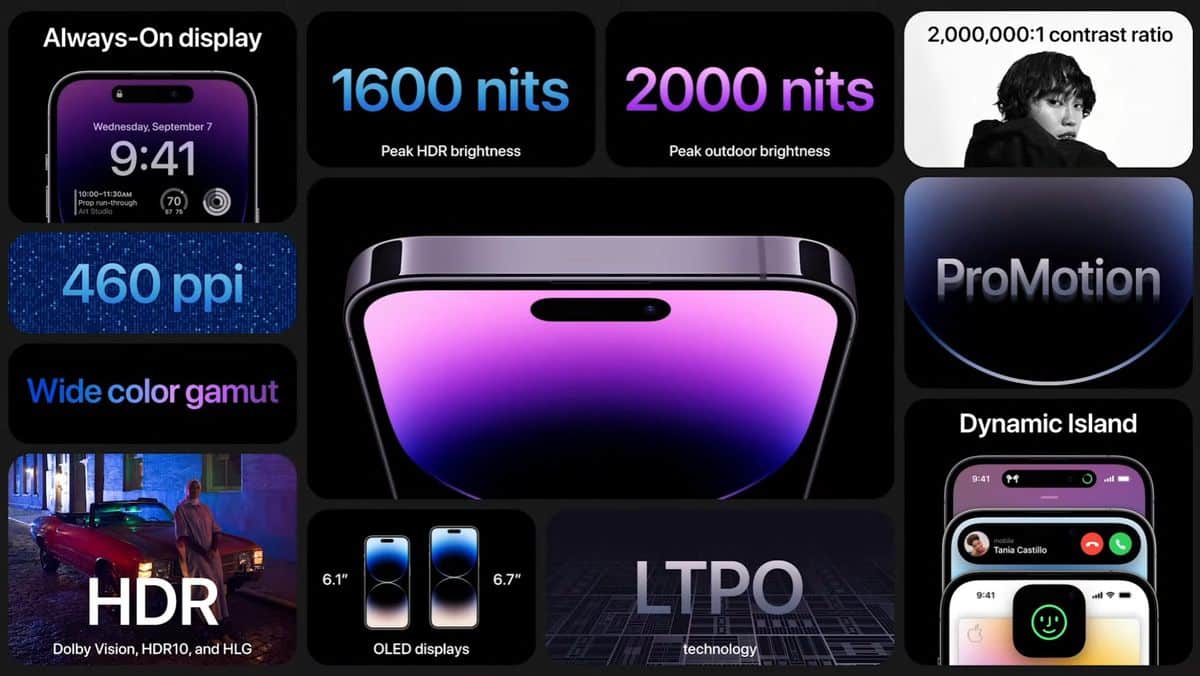 Regarding the batteries, it is for the moment the total blur, Apple guaranteeing only a day of autonomy. No additional information on the respective capacities of the batteries or on the exact autonomy according to the different uses.

On the photo side, the devices have a new 48 MP main sensor that is larger than the old 12 MP sensor. Measuring 1/1.3 inch, the latter is 21% larger than the 1/1.65 inch sensor of the iPhone 13 Pro. Due to the increased megapixel count, the iPhone 14 Pro’s individual camera pixels are smaller, measuring “only” 1.22µm. Nevertheless, the devices promise to be much better in low light conditions. The new 48 MP camera especially allows the iPhone 14 Pro and Pro Max to shoot videos in 8K 24FPSa first for Apple, which is finally catching up in this area. 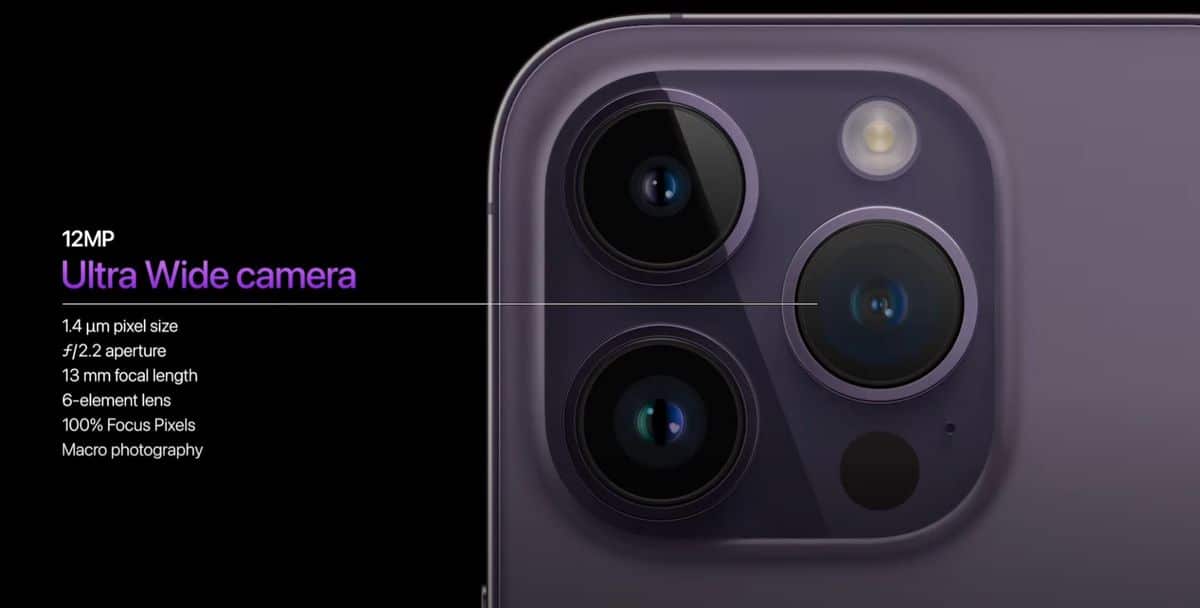 We also find a new 12 MP ultra wide-angle sensor with 1.4 micron individual pixels, which will also allow it to offer better shots at night. An ultra-wide-angle sensor is also included, with a triple increase in quality in low light according to Apple and a better support for macro photography. Finally, they also benefit from the new front camera with autofocus introduced on the other models.

As announced in a leak a few days ago, all new devices are marketed above the symbolic bar of 1000 euros, Apple having been forced to increase its prices by 120 euros on all models to face inflation, the global geopolitical situation, component shortages and the euro-dollar parity.

The 14 Pro Max model with 1 TB of storage reaches almost 2000 euros this year, which therefore makes it the most expensive iPhone ever marketed. In terms of colors, the iPhone 14 and 14 Max are both available in green, purple, blue, black (midnight), white (starlight) and red (product red), while the iPhone 14 Pro and 14 Pro Max models high-end are offered in green, purple, silver, gold and graphite.