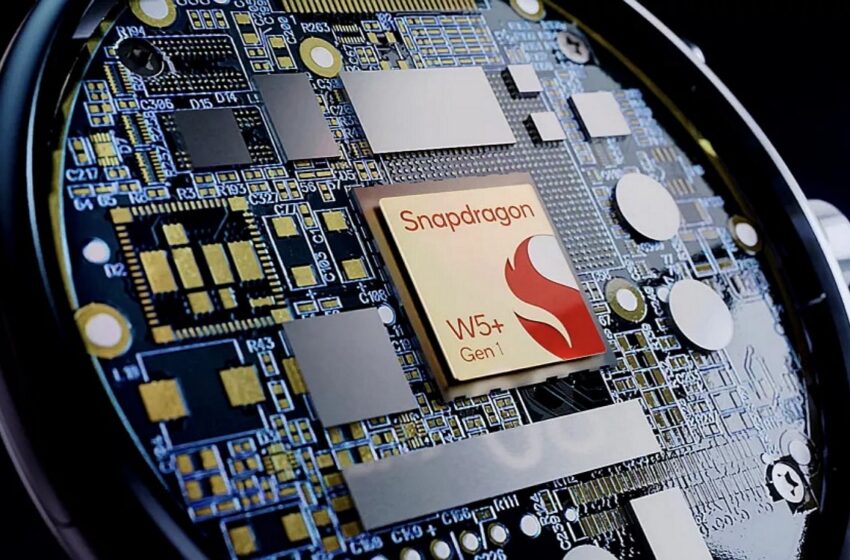 Qualcomm has lifted the lid on two new smartwatch processors that promise to be revolutionary, the Snapdragon W5 Gen 1 and W5+ Gen 1. These should arrive soon on Oppo’s next high-end watch, the Watch 3.

Until now, Snapdragon Wear chips have been fairly uninnovative mobile processors built from outdated technology, which is a big part of why Wear OS watches have performed so poorly compared to Apple Watches. However, Qualcomm intends revolutionize the smartwatch market with new, more advanced processors, the Snapdragon W5 Gen 1 and W5+ Gen 1.

Qualcomm claims that the W5 and W5+ will finally fix the biggest flaw in smartwatches, since they will extend battery life by up to 50%will double the performance and reduce the size of smartwatches by 30% compared to the current Wear 4000 platform.

To achieve such results, the Snapdragon W5 Gen 1 and W5 Gen 1+ rely on a new hybrid design with much finer 4nm etching combined with an integrated 22nm coprocessor. It is therefore a giant leap compared to the Snapdragon 4100 chips, which benefited from 12 nm engraving and a 28 nm coprocessor, andfiner engraving than the competition. By comparison, Samsung’s Exynos W920, which powers the Galaxy Watch 4, uses a 5nm process, while Apple’s S7 chip for the Apple Watch Series 7 uses a 7nm process. The watches that will use the new Snapdragon W5s therefore promise to be much more energy efficient. 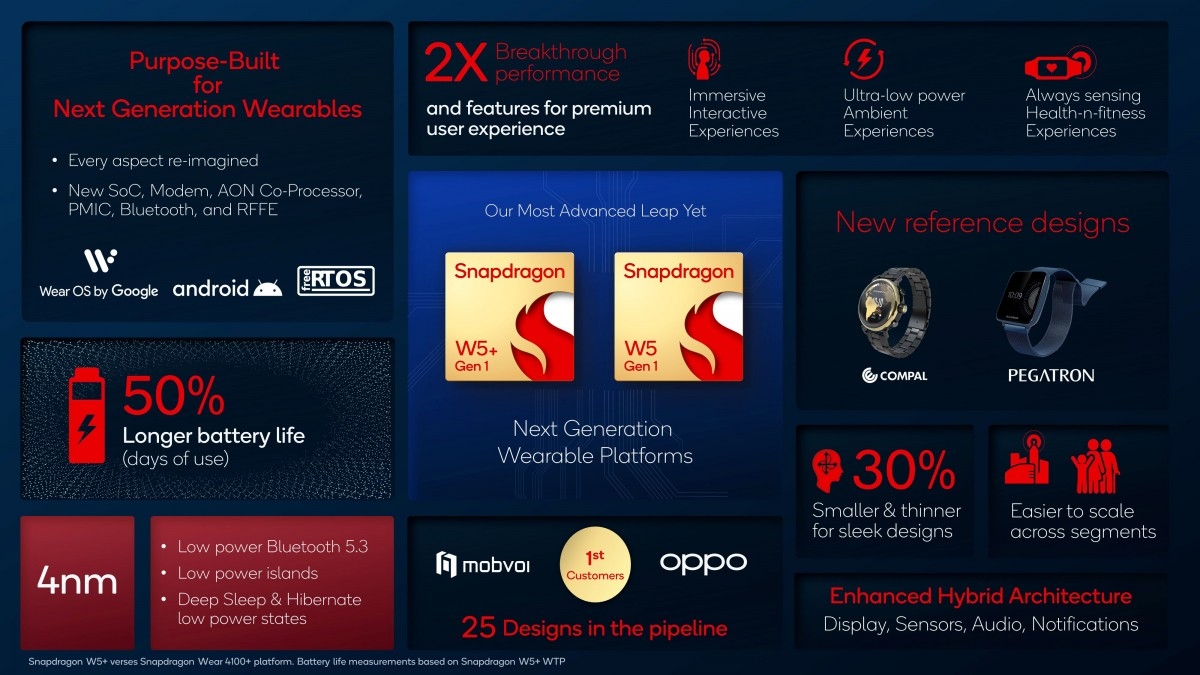 Qualcomm promises that the Snapdragon W5+ Gen 1 will offer 30-60% power reductions for the ” key use cases » compared to the Snapdragon Wear 4100+. The most significant improvement seems to be in background notifications, which see a 57% reduction in battery usage. However, the biggest area of ​​active battery drain remains VoLTE calls, which still benefit from around a 34% reduction in power consumption on the new chips.

Although both W5 Gen 1 chips retain the same Cortex-A53 cores from the previous generation, these are announced to be much faster thanks to an Adreno 702 GPU clocked at 1 GHz, compared to 320 MHz for the outgoing Adreno A504. On the other hand, W5 Gen 1 series supports LPDDR4X RAM clocked at 2133 MHz, which should give Wear OS a much higher bandwidth than the current Snapdragon Wear 4100 platforms. In addition, the W5+ Gen 1 has a Cortex-M55 coprocessor clocked at 250 MHzagainst 50 MHz for the Cortex-M0. 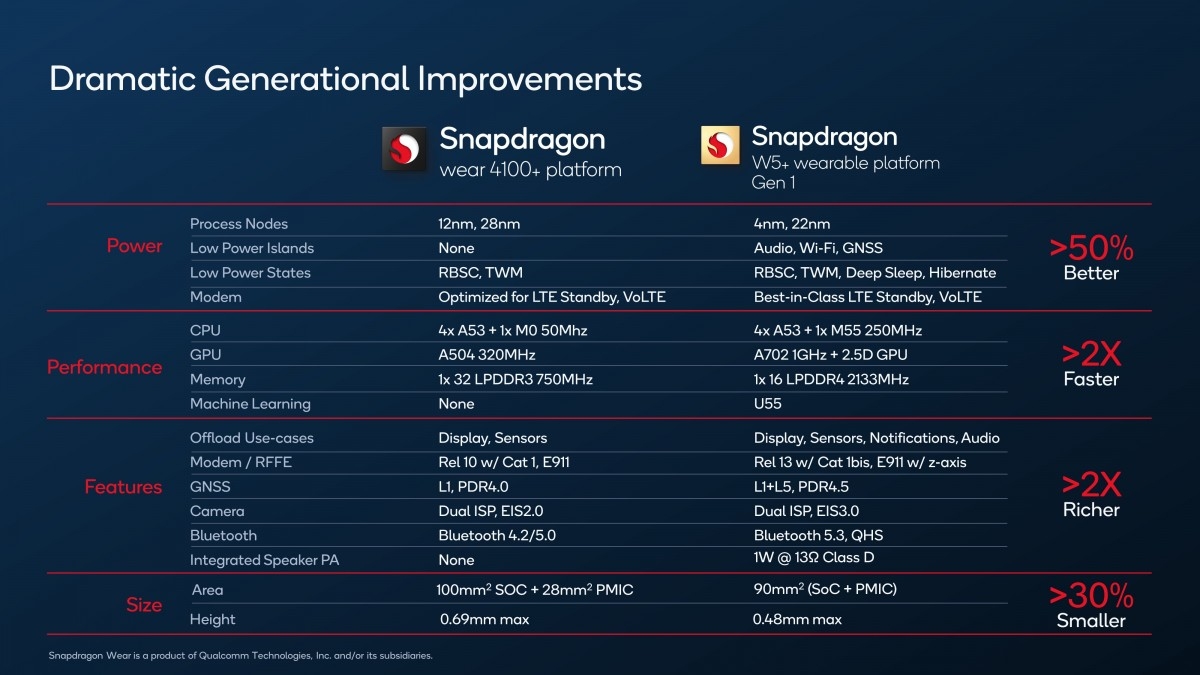 One can also note the presence of Bluetooth 5.3, which should greatly improve the stability of the connection with your watches, but especially their energy consumption. Qualcomm notably promises that your smartwatches will see their autonomy increases from 15 to 24 hours using these chips, which could bring the autonomy of the next watches under Wear OS to 2 or 3 days.

The W5+ and W5 are both high-end processors that you’ll see in Wear OS watches in the near future, but one of the first products to take advantage of them should be the Oppo Watch 3, which is expected next month. Indeed, Associate Vice President and President of Oppo’s IoT business, Franco Li, has announced that a new series of connected watches equipped with the W5 platform will arrive from August. 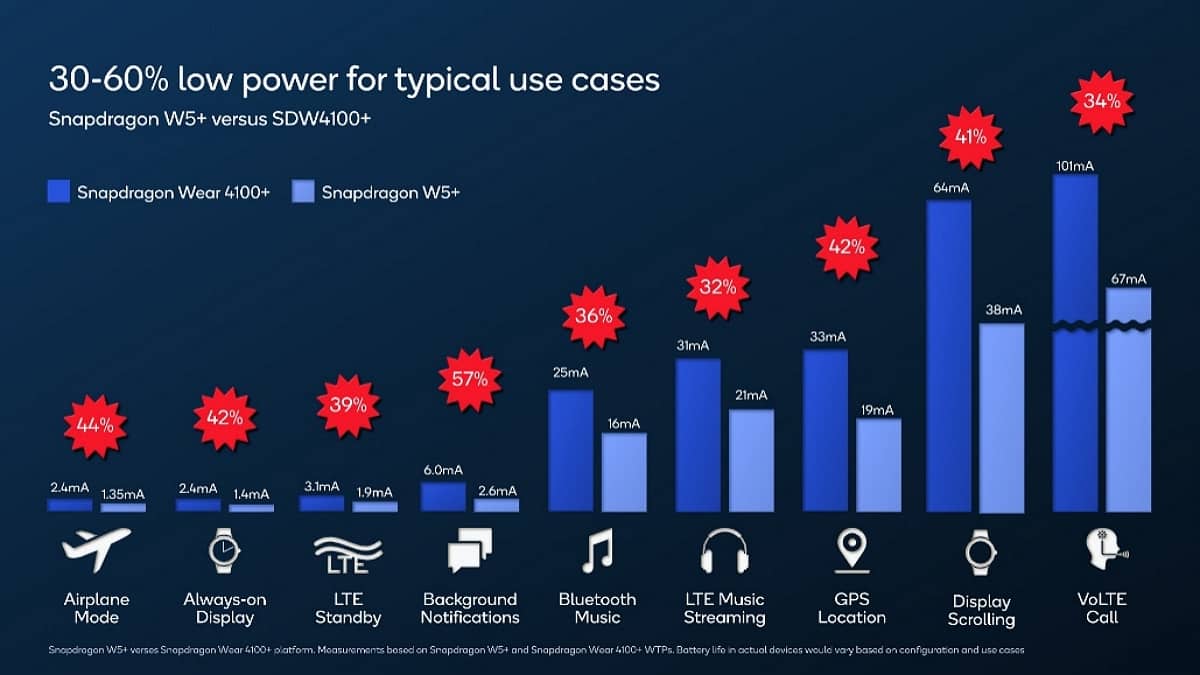 Since this is presumably a series, it is expected that the Oppo Watch 3 this time will be available in several different models. They will directly succeed the Oppo Watch 2, released in July last year. The new generation will therefore arrive just in time to compete with Samsung’s new Galaxy Watch 5 and Watch 5 Pro, of which we already know almost everything.

Before Oppo, Mobvoi is expected to be the first manufacturer to equip its flagship TicWatch Pro 4 smartwatch with W5 processors. Mobvoi started hinting at this smartwatch earlier this week, touting it as a flagship model with a ” long battery life “. More connected watches will follow in the coming months, Qualcomm already announces that more than 25 models are currently in preparation.