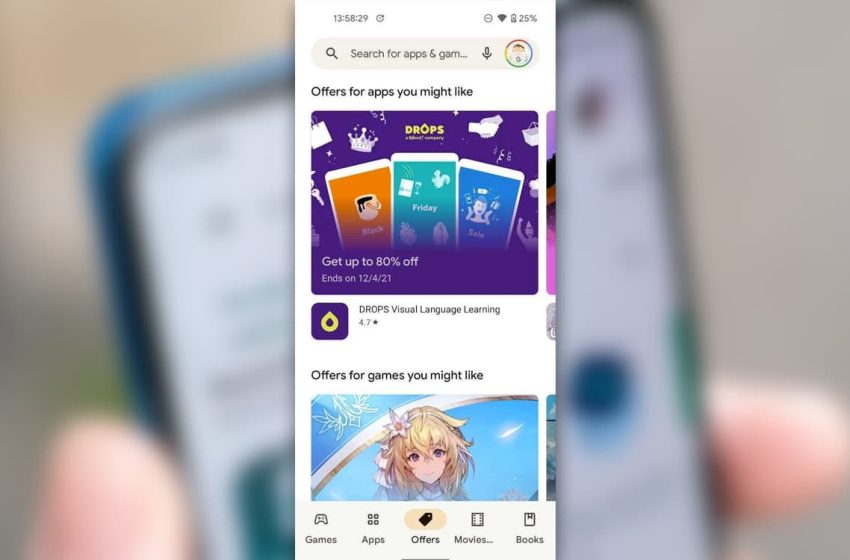 Some Android smartphones are now entitled to a novelty in their Play Store. Between the Apps and Movies and TV tabs is the Offer tab. The latter, not yet available to everyone, offers promotions on applications that may be of interest to the user.

Last month, the Play Store got an update making it in turn benefit from the Material You design, which arrived with Android 12. On the menu, a minor overhaul based on more rounded angles and a more ergonomic home screen. Google obviously does not intend to stop there. We already know that the web version of the platform should soon be entitled to a new interface. Smartphone users, meanwhile, can now discover a new tab.

At the bottom of the screen appears, for some, the Offers tab, located between Apps and Movies and TV. We will also note that the latter does not have enough room to display in full, which may seem a bit unsightly at first glance As reported by our colleagues from 9to5Google, this one is there to present “Offers about apps you might like”.

Google adds the Offers tab to the Play Store

For now, this tab is not yet available to all users. First of all, you must have subscribed to a Play Pass subscription. In addition to the apps, the page also has promotions on games that the account holder might like. Carousels illustrate the offers in question, which are also larger than the advertisements usually found on the store.

On the same topic: The Play Store will soon display all the data that Android apps collect on you

While similar, Deals is distinct from the Recommendations section of the Apps tab as it only applies to discounted apps and games. The idea is therefore above all tooffer new advertising space to a few privileged developers, much more effective than when it finds itself drowned among the other announcements. It is not yet known when the deployment to the general public is expected.