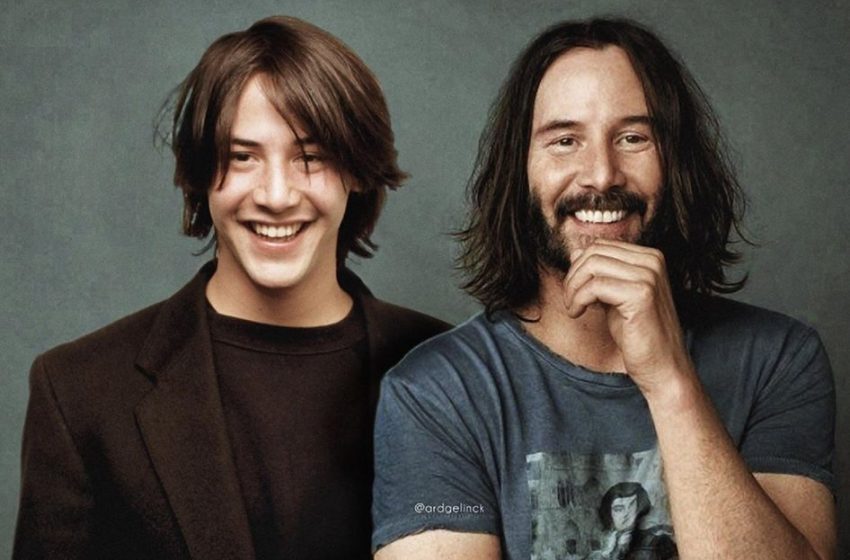 Then and now: A view of celebrities hanging out with their younger selves

(Pocket-lint) – A fairly recent trend has been for people to take the challenge of the decade – posting images of themselves years ago versus now, to show how much they’ve changed over the over the years.

A Photoshop master, however, took the challenge in a different direction. Ard Gelinck began posting images of celebrities and familiar faces on Instagram alongside images of themselves.

In some cases decades have passed since the original photos, the comparisons are something really special. Travel with us through history presenting you with a selection of our favourites.

We’ve always had a soft spot for Michael J. Fox. He hasn’t had an easy life thanks to his battle with Parkinson’s disease, but he’s not letting it stop him from doing great things. This Photoshopping isn’t as fantastic as the man, but definitely a good homage to him.

Clint Eastwood may be 90, but he’s still into acting and going strong too. He started acting in the 1950s and later moved into directing and producing, building up a pretty stellar filmography over the decades. This amazing photoshopped image shows a weathered but unbroken Clint Eastwood with his younger self posing happily and grumpily for the camera.

The brilliant Robert De Niro embraces his younger self. A throwback to a time when he had much more impressive hair. We wonder what these two versions of him would talk about if they could really meet like this.

Recently dubbed “Breathtaking”, Keanu Reeves is another beautiful acting legend who is shrouded in myths and urban legends. We know he’s set to return to the screen for the new Bill & Ted movie, another Matrix movie, and, of course, more John Wick. Here we see an aging, but no less cheerful Keanu, side by side with his younger self.

Brad Pitt is one of those actors who not only barely seems to age, but gets better with each passing year. Here we see him posing with his much younger self, with the notable difference being a very 80s vibe in the original photo.

It’s a photo of then and now that really stands out from the rest. Somehow young George Clooney almost doesn’t even look like the same man.

In time for US President Biden’s inauguration, Ard created this brilliant Photoshopping showing a young Joe Biden from 1967 photographed alongside his eldest. We wonder if young Joe had any idea of ​​his future prospects. We love that her smile hasn’t changed over time.

We really appreciate these images where Ard not only photoshopped recent images, but took the subject as a child and drew a comparison to decades later. Comedian Chris Rock certainly looked fun even as a kid.

We’ll happily admit to having a crush on Gillian Anderson back when she played Dana Skull in The X-Files. Now she’s in comedies like Sex Education, things have changed a lot for the actress but she’s just as awesome. In fact, this picture might just be proof that it’s not just men who get better with age.

It’s been many years since Macaulay Culkin starred as Kevin McCallister in Home Alone, but he still has the same mischievous look. We wonder what advice a grown Macaulay would give to his younger self.

We were deeply disappointed when The Good Place ended but it warms our hearts to see Ted Danson on screen in any form and honestly that image of him mixed in with a Cheers alum is also fantastic .

Bill Murray is making a return to the role of Peter Venkman in Ghostbusters Afterlife and we’re thrilled. The man, the myth, the legend is everyone’s favorite, especially the internets. This image of him side by side with himself spans decades and it’s almost as fantastical as him.

This comparison from time to time shows that Pierce Brosnan is another one of those frustratingly handsome men who get better with age. What a look. Arguably one of the best Bond actors still has it.

Al Pacino has played many different characters over the years, but if we say the words “say hello to my boyfriend” then one, in particular, comes to mind. It’s been several decades since his appearance in Scarface but Al Pacino is still a regular favorite on the big screen. Al Pacino has appeared in at least 60 films, which is quite an achievement.

Former Mr. Olympia, Conan the Barbarian, Terminator and Governor of California. Arnold Schwarzenegger has many accomplishments to his credit. Now it is seen in all its glory, both then and known through the talents of Ard Gelinck.

It’s always a treat to watch Harrison Ford do his thing and no doubt most people remember him fondly for playing Han Solo. The franchise’s recent releases mean that we occasionally see visions of not just the actor, but him in Star Wars mode as well.

It’s a topic of much debate on the internet, but in our minds, Sean Connery is the better Bond. He’s also an amazing actor and a handsome devil. This Photoshopping of him standing next to him younger just goes to show how he’s only getting better with age.

We’re big fans of Michael J. Fox and even bigger fans of Back to the Future – what self-respecting geek isn’t? So this image of Mr. Fox hanging out with Marty McFly is truly a thing of beauty.

Turns out football legend Christiano Ronaldo has always had a bit of a cheeky smile. We bet when he was so young though he never dreamed of what the future held for him.

An older, but still dapper Tom Cruise is seen here alongside his younger self. Many years have passed, but Cruise might just be proof that some men get better with age.

English singer and songwriter Amy Winehouse may have died tragically in early 2011, but here she lives with two beautiful visions of her past in one brilliantly crafted photo.

Another British singer-songwriter gone, but not forgotten. This photo works as a brilliant homage to Queen’s lead singer who also recently paid homage in Bohemian Rhapsody, the stunning debut biography Rami Malek.

Richard Gere started acting in the 1970s, he’s come a long way since then. He was even considered a sex symbol a few times over the decades. Thanks to Ard Gelinck, we can now see it like never before. There are probably at least twenty years or more between these photos, but they have been retouched together in a convincing way.

We don’t know what Tom Selleck’s secret is, but this side-by-side photo of him seems to show that his mustache is getting better with age. There’s no denying that he’s gorgeous, and that brilliant Photoshopping is a wonderful piece of art that we’re sure he’d love.

Wax, wax. Years later, years later. A brilliant “then-to-now” vision of acting legend Ralph Macchio, best known for his role in The Karate Kid. It looks more like a shot of a proud father and his son, but we love how the younger version seems to be looking halfway, perhaps wondering what lies ahead in his future.

The Fresh Prince kicks things off with a tailored, booted adult version of himself. We really appreciate the little touches of this Photoshopping – like the backdrop that makes it look like they’re both at the same photoshoot.

A classic shot of Julia Roberts during her role in Pretty Woman. Hilariously, the original photo showed Julia Roberts kissing co-star Richard Gere, but she’s now kissing an older version of herself thanks to the power of Photoshop.

Henry Winkler may be best known as Fonzie from the 1970s sitcom Happy Days, but his smile is just as impressive today as it was all those decades ago. He’s a happy guy, who still has acting skills – we loved him on HBO’s ‘Barry’ in 2018.

Action hero star and gaming legend Mel Gibson is another addition to this list of brilliantly handsome men who just got better with age. We also love the happy results of this Photoshopping. It might not be as convincing as the others, but it’s hard to see past the piercing gaze anyway.

They say you should never get on a plane, boat or spaceship with this man because he is not a great travel companion. However, he makes an amazing actor. It also makes another great “then and now” photo.

A very enjoyable vision of a young Harry Potter (aka Daniel Radcliffe) with his older, more worldly self. We really enjoy this Photoshopping and the way it’s presented with the young Radcliffe sitting taller above his elder.

Ok so this one technically isn’t a celebrity with a younger version of themselves but it still deserves to be on the list because it shows the latest Bond actor with one of the most known to our time. Sean Connery sadly passed away in 2020, but this image is a brilliant tribute to him and a great view of two super Bonds.

This is just a taste of Ard Gelinck’s amazing works, be sure to stop by his page and follow him for more in the future.

Heath Ledger was an absolute acting legend and was the definitive Joker in our minds. His passing is a sad loss to the world, but this image is a wonderful tribute to him.

Bruce Willis is one of those actors who gets better with age. Here he is seen as he was in the 1980s crime drama Moonlighting alongside his modern self.