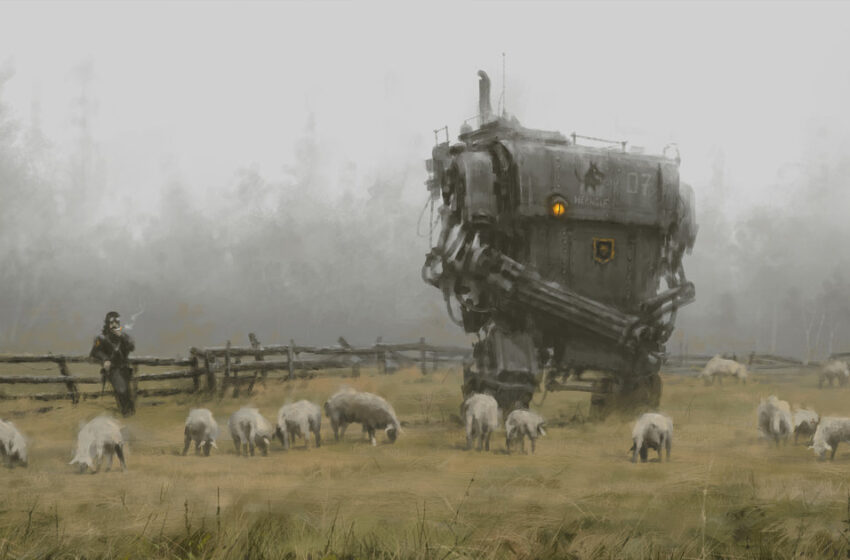 These incredible alternate world paintings from the 1920s include mechs, bears and wolves.

(Pocket-lint) – Polish artist Jakub Rozalski, also known as Mr Werewolf, has a brilliant talent for reimagining the early decades of the 1900s in steampunk style.

This artist has lovingly created a captivating collection of artworks loosely rooted in 1920s Eastern Europe, where the landscape was overrun with fantastical beasts, mechanized monstrosities, and all manner of wonders.

We’ve rounded up a sampling of some of the most interesting for your viewing pleasure. Join us on a journey through time to an alternate reality, sometimes terrifying, sometimes thrilling.

Mech on the ground

There’s a lot to love about this alternate take on the past. The victorious troops (and their bear) stand proudly above their slain Mech as a photographer prepares to capture the vision for the history books.

We like the idea that in a world where massive, hulking machines are able to roam the land, seemingly ancient camera technology is all this reality can muster. Perhaps more emphasis is placed on attacking abilities than on photography.

A walk in the woods

In this painting we see another vision of Gunter and Nacht taking a leisurely stroll through the woods. A menacing tank on stilts is in the background.

This image is also part of a series of paintings designed as concept art for a game called Iron Harvest. This game is set in an alternate reality of 1920+, just after the end of the Great War and appears to be Jakub Rozalski’s vision come true.

Jakub Rozalski’s art not only plays a role in the RTS video game, but also appeared as the theme for Scythe – a 2016 board game that started life on Kickstarter before capturing heart and mind. players from all over the world.

This game is set in the alternate era of the 1920s, with warfare, farming, and massive mechas playing their part.

Everyone needs to eat. Even as the battle unfolds, workers are busy in the fields to keep life going.

We love how the artist used the light to highlight the scene and add an extra threat to the marching mechs.

In a wonderfully rural landscape, a Polish crew can be seen repairing their damaged PZM-7 mecha, while a woman brings them something to eat.

Once again the cows go about their business, undisturbed by the sounds and sights of war that have become so common.

A young boy witnesses the emergency landing of a huge airship on the outskirts of an industrial city.

Again, the viewer can appreciate plenty of detail, including the appearance of another bear in the background and an urgent motion blur from the massive ship.

Far from the front line

We see a mecha and its pilot taking a well-deserved rest away from the front line. The grazing sheep are unimpressed by the menacing machine.

This painting apparently shows a mech known as Pz. Kpfm. IV Vielfraß – a machine that should appear in the game Iron Harvest in the near future.

guest from the west

This painting is another of Jakub Rozalski’s most interesting images, not necessarily for its content, but for the thought it elicited.

We can also see the painting process in action, thanks to an accompanying real-time video created using ProCreate.

This painting is another work by Jakub Rozalski used as inspiration for the strategy game Iron Harvest.

The seemingly fearless soldier, Anna, seen here in the foreground, will be one of the game’s main characters and an important part of the 1920+ universe.

Take your dog for a walk

In general, walking your dog is either a pleasure or a chore, depending on the free time you have and the weather. But in a world where the landscape has been scorched by an angry airship, it’s certainly a thrilling journey.

This painting shows Gunter and his companion Nacht – a sinister wolf – who are perplexed by the sight of their favorite forest destroyed by fire. With each of these images, Mr. Werewolf gives us a glimpse of the dangerous world he has created. He also shows the thoughts behind his art with additional frames (viewable on his site) showing the stages of each creation.

This painting has a caption that suggests a more “positive” atmosphere. Which at first glance is hard to see when the woman in the foreground appears to have a hand raised in surrender and an irate looking robot stands in the background with some serious firepower. .

On closer inspection, a woman and child are seen flying a kite and the soldier appears to be waving a bouquet of flowers at the woman who is presumably waving back. These images evoke all sorts of curious feelings. Is it an invading army or a defense force?

This illustration, from the board game Scythe, shows an impressive ship that inexplicably defies gravity and psychic laws by floating gracefully through the air.

This wonderfully contrasting scene also shows a lady in an elegant white dress greeting people on board as the ship passes. The giant cannons on the bridge meanwhile are pointed in his direction.

As winter begins to melt, calm and fearless cows carelessly chew the grass beneath their feet as a mechanized battle unfolds around them.

These large, menacing machines are thankfully not a reality, but it’s not hard to imagine that they could have been. Especially considering the size and scale of the concept tanks that Nazi Germany was building at the end of WWII.

As you may have already realized, wolves and mechs feature heavily in Mr. Werewolf’s works. In this snowy landscape, it seems people appreciate having four-legged companions to help ease their misery.

Anna and the guys

Iron Harvest’s Anna makes another appearance, this time with her comrades and some seriously menacing mechs in the background. These soldiers are probably fed up with the mud and are exhausted from the war.

Jakub’s works evoke fascinating and vivid views of fictional landscapes that help us lose ourselves in imagining what life must be like for these people. How terrifying it would be to suffer the wrath of one of these mechs, for example.

Some of the images are impressive, not only in their content, but also in the means used to achieve them. Jakub says this sketch of some Soviet mechs in a field only took 30 minutes to produce.

We wouldn’t even know where to begin to create this, let alone produce it in such a short time.

We love the cows quietly going about their business in this field while the mechs stand nearby. As if this was all perfectly normal. Nothing to see here.

The battle before the battle

The latest painting in our collection is another vision used for the upcoming Iron Harvest game. In the freezing winter snows, soldiers can be seen having a snowball fight while others prepare for battle. Another bear also appears to have fun and frolic.

Rozalski not only creates beautiful and intriguing works, he also tells a story with his images.

In this case, Olga is even more intriguing than it seems at first glance:

“After Rasputin came to power, Olga, together with a small group of followers, was forced to flee St. Petersburg. She found refuge in the wild and inaccessible regions of Siberia, where she continued guerrilla warfare against Rasputin’s troops There she met Dr. Stanisław Tarkowski, an archaeologist, adventurer and researcher of ancient civilizations. They often collaborated and fought side by side. Olga was fascinated by the work and findings of Dr. Tarkowski, his research on a mysterious ancient civilization. When ‘one day Dr. Tarkowski and his whole expedition disappear near the Tunguska River, Olga goes to the rescue of her old friend.

In the depths of an ice cave, a soldier is confronted with a horrifying feature and must fight for his life. It’s not just the mechs to fear in this alternate reality.

“Captain’s Logbook Continuing our journey in the footsteps of Dr. Tarkovsky, we found a strange complex of ice caves near the Chukchi Peninsula. The walls were covered with mysterious ancient signs. There was a strange energy and evil here. The first group we sent out to scout never came back. Eventually, with some experienced members of our exepdation, I ducked into the cave myself. What we encountered there, in this ice cave, will haunt me until the end of my days!”.

Olga and her tiger Chang on the front line

There is something quite intriguing in these images where we see mechas but also animals. Imagine seeing a tiger on the battlefield to begin with.