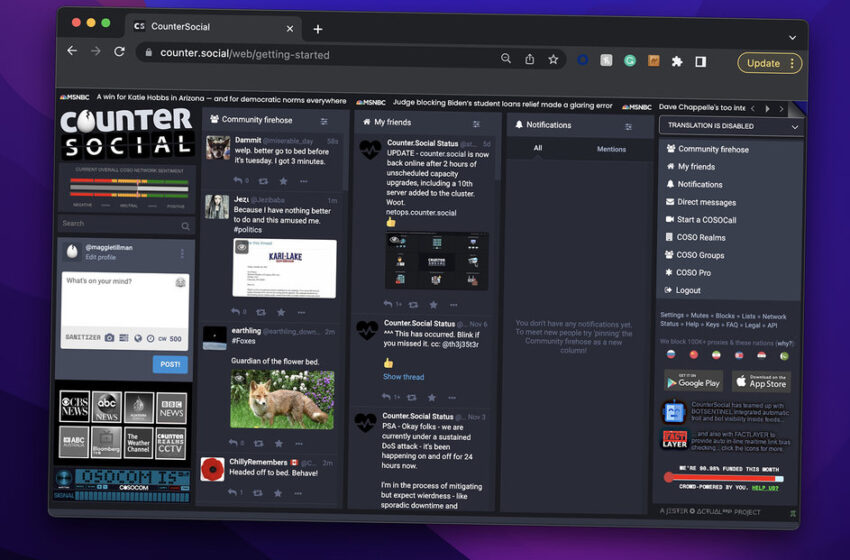 Want to quit Twitter? Here are 3 cool alternatives to try

(Pocket-lint) – There’s a lot going on with Twitter right now. Elon Musk has taken over, laid off thousands of employees, and is making changes (and rollbacks) on an almost daily basis. It’s pure chaos, honestly. If you’re not comfortable with what’s happening at Twitter for any reason, you can simply choose to use another platform instead.

Here are three unique alternatives to Twitter. We don’t just list the most popular social networks. We actually found different sites that have a very similar experience or vibe to Twitter.

Mastodon is a free social media site that works much like Twitter. You can post “toots” (rather than tweets), follow other users and brands, as well as favor (like) and boost (retweet) posts. It is an open-source, decentralized social networking platform. It was created by Eugen Rochko, the CEO and only employee of the non-profit organization Mastodon gGmbH.

Being decentralized, it allows users to create, host and moderate their own communities, or “instances”, which can communicate with each other through a system called Fediverse.

Popular instances include PeerTube for videos, Funkwhale for music, PixelFed for photos, and NextCloud for files. Perhaps the most famous example of Mastodon is Truth Social, aka former US President Donald Trump’s “social network”. There is no common Mastodon space for everyone, as there is for Twitter. So you need to sign up for a specific Mastodon instance, which can be based on geographic location, topic, or whatever. You can subscribe to as many instances as you want and leave or switch instances at any time.

And you can follow people on multiple instances, so choosing one doesn’t prevent you from communicating with those on other instances.

CounterSocial launched in November 2017, with its infrastructure based on open-source code from Mastodon (another platform we recommended). CounterSocial is unique because it has a zero-tolerance policy against trolls, spam bots, disinformation campaigns, harassment, and foreign political influence. The pseudo hacktivist known as “The Jester” started CounterSocial because he claimed he was tired of misinformation – so he developed a controlled or walled-off social network where it could all be moderated.

As of August 2022, the site has around 100,000 users and, according to its founder, it continues to experience steady growth.

So what makes it similar to Twitter? If you’ve used Tweetdeck before, CounterSocial’s columnar interface will be instantly recognizable. You can remove, rearrange, or create columns, and these can be based on hashtags, user lists, and topics. If you are a free user, you can follow, like, share and comment on posts and replies. You’ll need to pay for a pro account ($5 per month) to access other premium features, such as changing your status and the ability to “blow up” your messages.

Cohost is currently in beta. It is an ad-free social media platform co-founded by Colin Bayer and Jae Kaplan. It was first rolled out to select users in February 2022.

This week, we discuss the Razr 2022, review the latest iPad, and chat with HB Studios about PGA Tour 2K23.

On Cohosts, messages are placed on a vertical timeline, like on Twitter. But instead of being fed by algorithms, posts are always listed in the order they were posted. The site looks like a classic blog site. Messages are not limited in number of characters and it is possible to create several pages for different themes or projects. You can create a co-owned page that multiple people can use, similar to podcasts. Co-host offers a subscription to unlock premium features – like bigger downloads – and promises to “never sell your data”.

You do not need an invitation to join Cohost. But if you don’t have an invite, you’ll only be able to take a peek and may have to wait “a day or two” before posting.

Here are a few other options – but these are more popular, and chances are you’ve already tried them:

LinkedIn: It’s geared more towards professionals who want to network, but it has a newsfeed and allows users to follow each other and share posts, photos, videos, polls, and more.

Discord: Leading social media site with over 150 million monthly active users. But there is no news feed. There are chat rooms where you can communicate via voice or video calls.

Club house: More for people who love Twitter Spaces. It allows you to host live audio chat rooms. Clubhouse surged in popularity during the height of the pandemic.