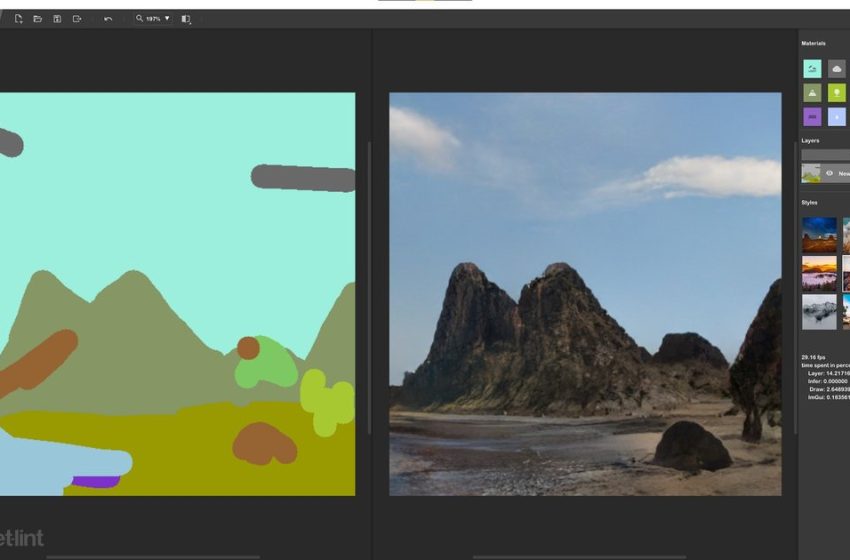 (Pocket-lint) – Nvidia’s smart bods are always coming up with new ways to use artificial intelligence to do weird and wonderful things. This includes creating new tools to help creators up their game and improve their workflow. But it also sometimes means freeware that we can all turn to.

Nvidia Canvas is one such product. This free app uses AI to turn your digital brushstrokes into realistic images in real time. That’s right, with the help of Nvidia, you can turn your sketches and doodles into a work of art.

The Canvas app is available to anyone, with one caveat: you need to be running an Nvidia RTX graphics card for it to work. As long as it is, you can just load the app and then start painting.

The painting process is quite simple too. On the right side there is a grid of tools which allows you to choose from a number of different “materials” to paint with. This list includes sky, clouds, grass, hills, stone, sea, sand, rivers, fog and more. Select one of these and paint a drop and you will see a corresponding realistic image appear on the second panel.

There is also an option to switch between different styles which are like filters for your final image.

With just a few brushstrokes, you can create all sorts of different images that could easily have been taken in the real world. If you’re particularly impressed with the results, you can export it as a .psd file and import it into Adobe Photoshop to add some finishing touches.

What are you waiting for? Download Canvas and start painting now. We have created a few examples for your enjoyment.

A landscape of cloudy sand

We created this image using the Canvas app and simple brush strokes. A few with the cloud tool, another left for the hillside, then a wash of sand in the far background.

The result is quite an attractive sunset view. And a convincing one too.

For this image we just used two tools, one to paint gravel in the foreground, the second to paint the sea lapping happily in the distance. The result is surprisingly convincing.

Here we were trying to create a rugged landscape with a single puddle, a lone tree, and a reasonably cloudy day. It’s not entirely convincing, we admit, because the sun looks particularly crazy.

By using AI, it’s easy to create more curious and artistic views of the world. Here, with a few brushstrokes, we’ve managed to create an eerie mountain with a red sunset highlighting its peak.

We’re really impressed with the views you can create with the Canvas app. It’s wonderfully easy to create compelling landscapes. Here we managed to create an interesting view of the marshes on a cloudy but sunny day.

This image is the same painting as our swamp, but with styling applied. There is a simple button in the app that allows you to just press a button to change the style and completely revamp your image.

The app’s tools allow you to add all sorts of things, from straw to snow, gravel, sand, stone, flowers, water, mud and more.

We used the straw tool to create a field of wheat.

We tried to create something a little more arty with this one. A reasonably sunny looking grass area is now crossed by snowy boot prints. Somehow not melted and not worried by the heat of the sun.

A day of snow

A simple snowy view that we created as a peaceful and serene place. There is a coolness in the air, no doubt, but a pleasant peace in this entirely false landscape.

A snowy view at night

Again, we kept an image we had created and just applied a different style to it. Suddenly, the wonderfully peaceful snowy region is set against the backdrop of the wonder of our universe stretching across the night sky.

The AI ​​power here is good enough to create close-up views of grains of sand on a made-up beach. There are some blurry parts around the edges, but it could easily have been taken with a shaky hand and a smartphone or bokeh style.