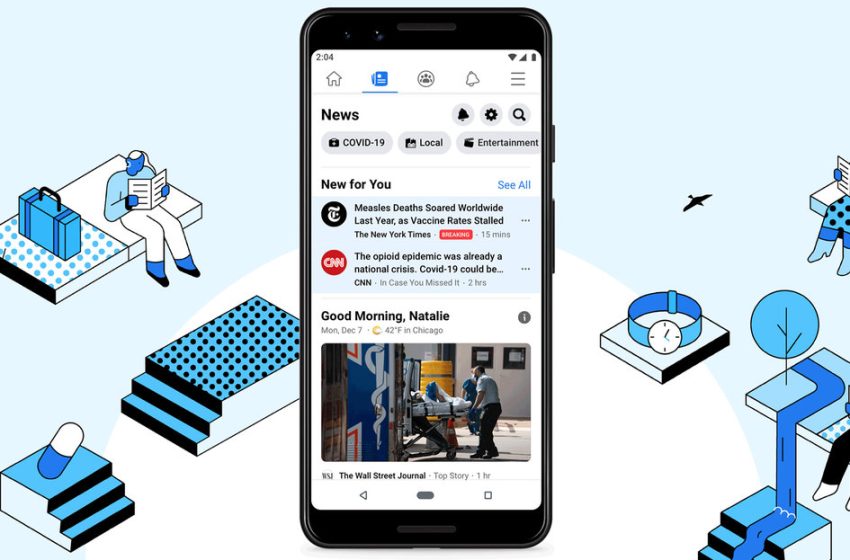 What is Facebook News and how does it work?

Called Facebook News, it’s described as a “place on Facebook for all the news you care about”, and it’s primarily intended to give Facebook users more control over their experience and the news they see on the platform.

Facebook said in a blog post that the news could come to Germany, France, India and/or Brazil, but for now it’s limited to the US and UK.

Facebook News is a tab in the Facebook mobile app. It appears as a bookmark – under the three-line “more” menu – on mobile. Those who frequently visit the bookmark will see News available as a tab or button in the Facebook app.

Remark: the News desktop tab has not yet launched.

Facebook said it wants to acknowledge original reports because they are more expensive to produce. So its curation team of journalists, which runs the Todays Stories section of Facebook News, rewards original stories by choosing them first. Other features include breaking news alerts, timely news digests and targeted notifications.

Facebook News serves reports from more than 200 general news publishers, including the Wall Street Journal, USA Today and BuzzFeed in the United States. In the UK, publications such as Channel 4, Sky News, The Guardian, The Economist, The Independent, Cosmopolitan, The Daily Mail, Financial Times and The Telegraph were all on board.

According to The Verge and the BBC, Facebook is paying some publishers for “content that isn’t already on the platform”, providing a new revenue stream in the industry. Facebook said publishers who want to participate will need to be listed in its News Page Index, which it developed in “collaboration with the industry to identify news content”.

Publishers must comply with Facebook’s Publisher Guidelines, which are supposed to include “a range of integrity signals to determine product eligibility, including misinformation – as identified based on third-party fact checkers – violations of community standards (e.g. hate speech), clickbait, engagement bait, and others”. Facebook has promised to continuously check the integrity status to ensure eligibility criteria are met.

We do not know yet.

Facebook has not released the full list of posts joining Facebook News, raising serious concerns about its potential to spread fake news. But Facebook said it uses journalists to help schedule Facebook News, and there’s an underlying algorithm to personalize your News Feed. Users can react, post articles, and hide articles, but they cannot comment. They can also hide topics and editors.

Check out Facebook’s announcement blog for more details. You can also learn more about Facebook News at www.facebook.com/news.