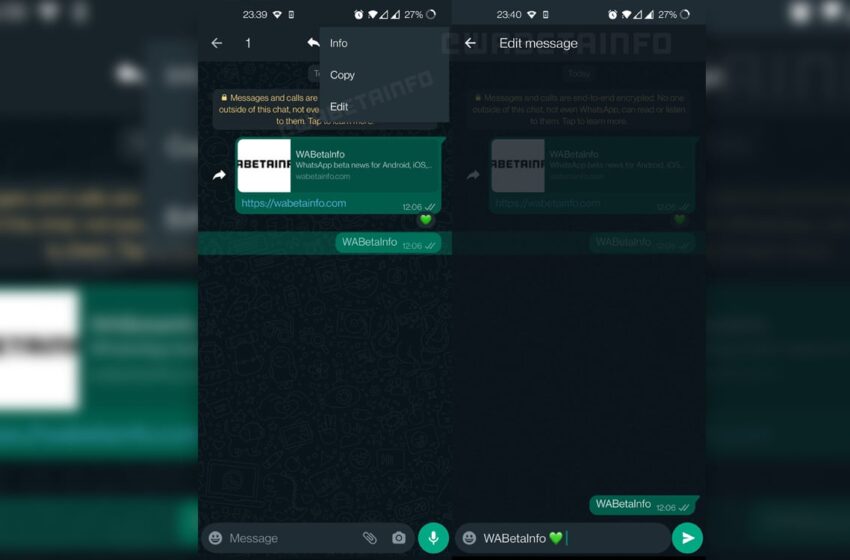 WhatsApp will finally allow you to modify your messages after sending

Have you always dreamed of being able to correct that little unsightly spelling mistake after sending the message on WhatsApp? It will soon be possible. The latest beta version of the application finally hosts an Edit button that appears by remaining pressed on the message in question. The first trials date back five years.

Despite its many advantages over the competition, WhatsApp accuses the lack of a functionality as widespread as it is essential: the possibility of modifying its messages after sending. Discord, Skype, Slack, Telegram: all allow you to correct this ugly spelling error that had gone unnoticed before pressing the send button. Still, it’s no fault users have been asking for this option, and have been for years.

Especially since WhatsApp has already shown signs of progress in the project. In 2017, five years ago already, a beta version already hosted the feature. But it never found its way to the mainstream version of messaging, for some reason that’s still hard to explain. No other choice therefore than to return a second message decked out with an asterisk, or even outright to delete the one containing the irreparable error.

Related – WhatsApp: Short-lived messages can soon be saved before they disappear

WhatsApp is working on an Edit button for its sent messages

Fortunately, that is about to change. At least let’s hope so, because things are looking pretty promising. Indeed, an Edit button finally reappears in the WhatsApp beta. To use it, nothing could be simpler: just keep pressed for a few moments on the message to be edited so that a drop-down menu containing the famous button is displayed, as you can see in the screenshot above. .

Remember that this is still only a beta option and that it could take some time to be available to all users – if it ever will be. We can nevertheless reasonably count on it, given WhatsApp’s desire to offer expected features to its users, such as reactions to messages. So be patient, it’s probably just a matter of time.