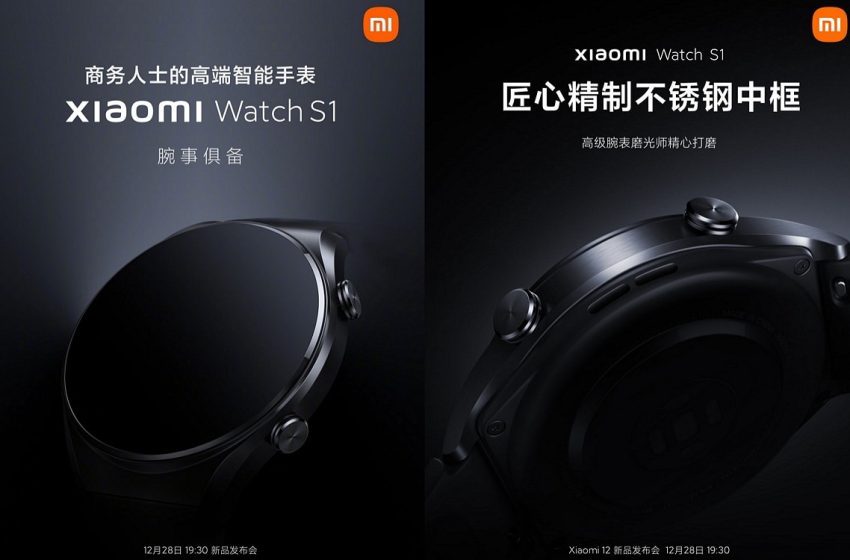 Xiaomi Watch S1: the ultra-resistant premium watch with sapphire crystal will be launched with the Xiaomi 12

Xiaomi will hold a conference tomorrow, Tuesday December 28, during which it will launch three smartphones, the Xiaomi 12, 12 Pro and 12X, its new MIUI 13 overlay, new headphones and other connected home devices, but also a top watch. range: the Xiaomi Watch S1.

Ahead of its presentation tomorrow, Xiaomi has already lifted the veil on the design and some technical characteristics of Next high-end connected watch, the Xiaomi Watch S1. The Chinese manufacturer has already announced the color on social networks: it will be a smart watch more robust and more elegant than previous generations.

Xiaomi unveiled its first high-end connected watch, the Mi Watch, in 2019. Strongly inspired by the Apple Watch, it had never seen the light of day in Europe, Xiaomi preferring to unveil here another circular Mi Watch, which ‘was light, efficient and very durable during our test. The new Xiaomi Watch S1 that will be presented tomorrow will offer even more high-end features than the current model.

A screen protected by sapphire crystal for the Xiaomi Watch S1

Xiaomi has officially unveiled on the Weibo social network that the Xiaomi Watch S1 will benefit from a screen protected by sapphire crystal. For those who do not know it, the sapphire crystal is one of the most resistant, after the diamond, which will make it possible to make the watch much more robust against drops and scratches.

Several other watches already use sapphire crystal, such as the latest high-end Apple Watch Series 7, the recent Huawei Watch 3 or even premium designer watches. As can be seen from the first images of the watch shared by Xiaomi, the Watch S1 will use a circular design with a rimless screen, but also a leather strap.

We imagine that the watch will be powered by Qualcomm’s fastest chip, the Snapdragon 4100+, and that it will offer more than a week of autonomy. According to the leaker @xiaomiui, several versions of the watch are in the boxes, including a Watch S Active as well as a Watch S Pro. The watch will be launched alongside the Xiaomi 12, and should arrive in France next year.