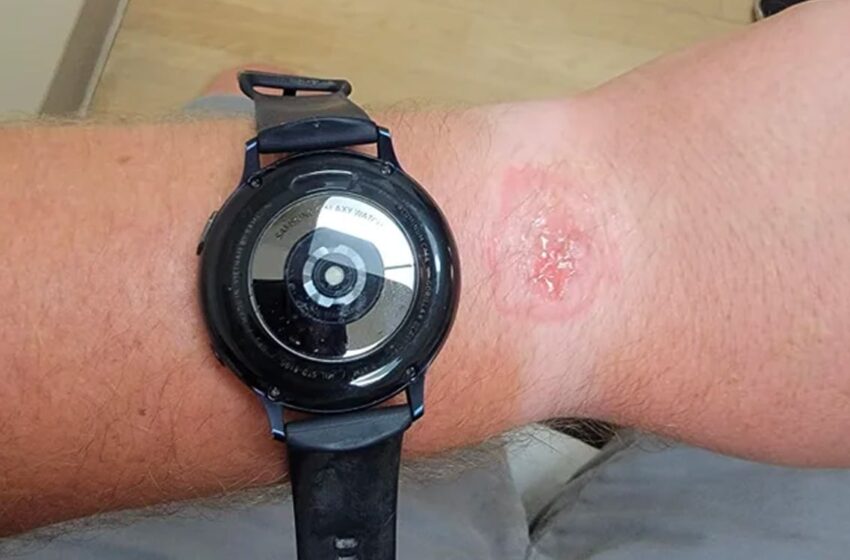 Galaxy Watch: a user reports severe burns to the wrist

The owner of a Galaxy Watch Active 2 claims to have been badly burned by his connected watch during the night. Overheating, caused by the degradation of the battery, is the preferred track. For the moment, Samsung has not officially reacted to this case.

If the Galaxy Watch can burn calories, it can also burn your wrist to the third degree. It is in any case the bitter what assures the user TheMattsterOfSelf on Reddit. Owner of a Galaxy Watch Active 2, he assures that the connected watch burned him severely at night during his sleep.

To support his point, the user published several photos of his wrist the same day. We can see well beautiful circular burn marks, which do indeed indicate that the heat came from the back of the watch. In the comments, he explains that he has been using this Galaxy Watch Active 2 for some time, in particular to help him with his insomnia.

Another burning case with a Galaxy Watch

Our colleagues at TechRadar have attempted to contact Samsung for an official statement on this matter. For the moment, the South Korean firm remained silent. We will of course update this article if we have anything new on the subject. In any case, the reactions to the misadventure of The MattsterOfSelf are numerous, some pointing the finger at the manufacturer’s silence:

“Samsung should take this seriously. In 2016, Intel found itself in a storm with the Basis Peak (note: ) which was burning people with the optical sensor, and they had to pull it off the market and pay distributors and customers a ton of money for the damages,” reminds a sympathetic user.

Remember that this is not the first time that Galaxy Watches have been accused of causing burns on the wrists of users. In effect, an investigation is currently underway to gather evidence with a view to launching a class action lawsuit in the United States. At FitBit, the situation is not much better.

In May 2022, FitBit was forced to recall 1.7 million connected watches due to the risk of burns. The brand had undertaken to reimburse customers with a defective device. The problem stemmed from the Fitbit Ionic’s lithium-ion battery, which tended to overheat. Many users had decided to file a complaint against the manufacturer.