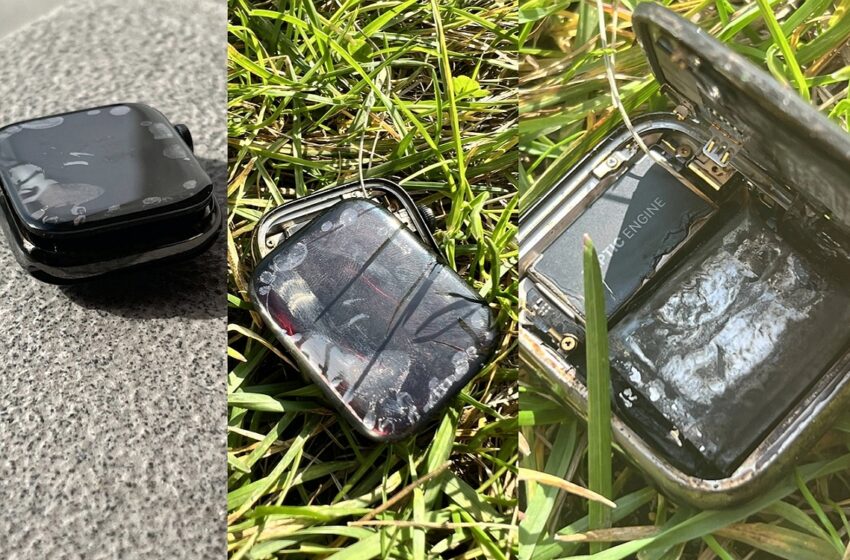 Apple Watch: the watch battery explodes and sends its owner to the hospital

An Apple Watch Series 7 user had the unpleasant surprise of seeing the battery of his connected watch overheat while he was wearing it before exploding, which could well have caused serious damage.

In a new report, our colleagues at 9to5Mac tell the incredible story of one of their readers who saw his watch battery explode. While it’s not uncommon to see Apple Watches save lives by detecting heart attacks or calling for help, Apple Watches can ultimately be dangerous as well.

Indeed, an owner of the Apple Watch Series 7 suddenly felt his watch overheating on his wrist. When he removed it, he noticed that the back of it had broken, and WatchOS displayed a warning announcing the shutdown of the system due to too high temperature. However, the ambient temperature was just over 21 degrees.

Watch battery goes up in smoke

After removing the device from his wrist, the user immediately alerted Apple support by phone. Unsurprisingly, the matter was taken very seriously, the call was quickly transferred to several high levels of the Apple Support hierarchy. An official of the American manufacturer has himself created a case for further investigation. Apple reportedly couldn’t quite identify the problem with this call, and simply advised the victim to do not touch the watch until contacted by service.

While the story could have ended there, the next morning, the owner of the Apple Watch Series 7 had the unpleasant surprise to find that sthe watch had become even hotter than the day before and the screen was starting to shatter in the heat. In no time, the device finally started to go up in smoke, until its owner decides to throw it out the window. It was too late, her couch had already suffered several burn marks.

After this disturbing new episode, the owner of the watch finally went to the hospital for fear of lead poisoning. Fortunately, it seems that the watch does not contain enough to cause such poisoning. The victim does not report any burns, since he would have managed to remove the watch just in time.

Back from the hospital, the victim contacted Apple services again to report the new incident and send them several photos taken at different times of the scene as evidence. Apple assured him that his issue was a top priority for the company, and promised to contact him again the following Monday. However, it took him much longer to hear any news about his case.

As one might expect, Apple collected the watch from its home to take it to its own laboratories for further testing, probably to try to determine the exact cause of the problem.

The Cupertino company would even have attempted to gloss over the matter. Apple reportedly asked owner of faulty Apple Watch Series 7 to sign a document pledging not to share the story with anyone. The latter refused, and finally decided to publicize the case.

It is clear that such a malfunction is not really what we can call good publicity for Apple, which is more used to highlighting its connected watches that save lives. For the moment, everything suggests that this is only an isolated case, because reports of such malfunctions are rare. However, Apple could very well have convinced other victims to keep the cases secret. Below you can see video of the smoking watch, just before it was thrown out the window.